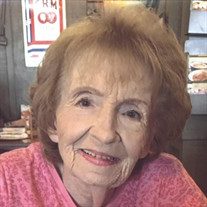 Ada Pearl Hulsey Parks, age 84, of Buford, GA passed away on Sunday, May 31, 2020. She was preceded in death by her husband of thirty-five years, Eugene Parks and parents, Seaborn and Pauline Pierce Hulsey. She is survived by her children, Kathy... View Obituary & Service Information

The family of Ada Pearl Hulsey Parks created this Life Tributes page to make it easy to share your memories.