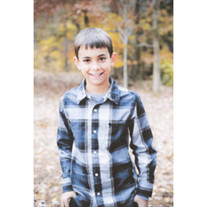 Andrew Ross (Drew) Caymol, 11, of Buford/Suwanee, GA met his Lord and Saviour on December 2, 2015 following a tragic automobile accident near his home in Buford, Georgia. Drew, born on November 29, 2004, was the son of Mateo Caymol, originally from Goose Creek, SC and Angela Ammons Caymol orginially from Camden, SC. In addition to his parents, Drew is also survived by his big brother, Matthew Keith Caymol, and big sister, Anna Logan Caymol, his maternal grandparents William R. (Billy) and Lynn L. Ammons of Camden, SC and paternal grandmother, Carolyn C. Caymol of Suwanee, GA. Drew also leaves behind numerous family members who loved him dearly including aunts and uncles Will and Elena H. Ammons, Bill and Aimee Ammons Spraul, Evan and Leigh Ammons Mahoney, Rick and Angela Caymol Schuckle, and Pam Caymol. Cousins Caroline, Will, Luke, Alex, Ellie, Addie, Bella, Lily, Ryan, Lucy, and Benjamin will forever miss their Drewbie Drew. An avid sports fan and competitor, Drew had a tremendous love of the Clemson Tigers and planned to go there one day to play ball. He loved basketball, playing many years in the NGBA rec and current GBL league, in addition to being part of two travel teams. He also enjoyed being an active part of USTA and ALTA junior tennis teams. He played everything he could, and played it well, but never did handle losing well, often throwing 2nd place trophies in the trashcan. His competitiveness was both his biggest strength and at times his biggest weakness. Drew had a love of life and could often be seen flashing a big dimpled grin or offering a big hug to his loved ones. He was funny and witty, making his friends and family laugh constantly. Life was never dull with Drewbie around. Though his life on earth was brief, his loving heart touched many as he compassionately befriended and helped out those who had trouble advocating for themselves. Drew was preceeded in death by his grandfather and best friend, Mateo E. Caymol. He will be terribly missed by all who were fortunate enough to know him. A service celebrating the life of Drew will be held this Saturday, December 19, 2015, at 1:00 pm. The service will be held in the auditorium of Gwinnett Church (www.gwinnettchurch.org) located at 300 Peachtree Industrial Boulevard, Sugar Hill, Georgia 30518. A private burial will follow.In lieu of flowers the family is requesting that any donations be made to Children's Healthcare of Atlanta for all of the incredible folks who have made such a difference in Matty's recovery, both now and during his two prior open heart surgeries. Donations to the Caymol family are also appreciated as detailed elsewhere on the Caymol Strong Facebook page. www.flaniganfuneralhome.com. Arrangements by: Junior E. Flanigan of Flanigan Funeral Home and Crematory, Buford, GA, 770-932-1133.

Andrew Ross (Drew) Caymol, 11, of Buford/Suwanee, GA met his Lord and Saviour on December 2, 2015 following a tragic automobile accident near his home in Buford, Georgia. Drew, born on November 29, 2004, was the son of Mateo Caymol, originally... View Obituary & Service Information

The family of Andrew Ross Caymol created this Life Tributes page to make it easy to share your memories.