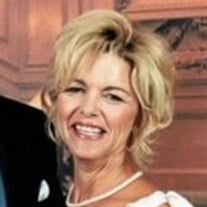 Angela Gail Todd, age 59, of Jefferson, GA passed away Saturday, January 2, 2021. She was preceded in death by her mother, Nita Gail Jordan. She is survived by her husband, Jack Todd, Jefferson, GA; children, Stephanie (Chris) Hunnicutt, Jefferson, GA, Chris Todd, Dacula, GA, Elizabeth (Jarid) Vickery, Ball Ground, GA, Jeremy Todd, Dacula, GA, Mary Catherine (Michael) Edwards, Acworth, GA; Father, James E "Jim" Nalley,Frankfort,KY, sisters, Lisa (John) Ramsey, Lexington, KY, Kim (Glenn) Rice, Lee’s Summit, MO; brother, Michael (Meredith) Nalley, Frankfort, KY; and grandchildren, Ella Hunnicutt, Hayden Hunnicutt, and Archer Vickery. Mrs. Todd was born October 6, 1961 in Bardstown, KY. A Mass Service will be held Friday, January 8, 2021 at 11:00 a.m. at St. Matthew Catholic Church in Winder, GA with Monsignor Jaime Barona officiating. Many have always said that Angela was born to be a mother. She loved her five children and three grandchildren more than anything. She never missed a baseball game, dance recital, swim meet, or cheer competition, as she was their greatest supporter. She cared so much for children in general. She volunteered to watch children in her neighborhood after school and during the summer to help other families. It was a running joke that only Angela would show up to the neighborhood pool with a car full of kids. She was so selfless and loving, and those qualities truly shined through her. Angela’s passion was to serve others, particularly the less fortunate and especially children. She worked with the Gwinnett County CASA program for ten years and was an advocate for children in at risk home environments. For fifteen years she organized her neighborhood to sponsor underprivileged families during the Christmas season, providing gifts that brightened the holidays for many local families. This experience led to her oversight of the Christmas Giving Tree program at St Matthew Church, where her efforts enabled the church faithful to similarly impact the lives of many more families during the Christmas season. Angela’s concern for the elderly was manifested in her service as a “Visiting Angel”, in which she had great joy assisting seniors with their daily living and allowing them to stay in their homes. She was known within the family for always giving to any who were asking for help, be they on a street corner or at a traffic light----a hand reaching out for assistance could never be ignored. Her concern for the homeless led to working with the Athens Homeless Shelter, providing financial help and clothing as well as meal preparation. Angela’s compassion for others always led to action and will remain an inspiration for many to continue the legacy she leaves. The family will receive friends Thursday, January 7th from 6:00 p.m. until 8:00 p.m. at the funeral home. In lieu of flowers, the family asks for contributions to the MSA Coalition, Multiple System Atrophy Coalition | Building Hope For People With MSA https://www.multiplesystematrophy.org To express condolences, please sign our online guest book at www.flaniganfuneralhome.com. Arrangements By: Junior E. Flanigan of Flanigan Funeral Home and Crematory, Buford, GA (770) 932-1133.

The family of Angela Gail Todd created this Life Tributes page to make it easy to share your memories.