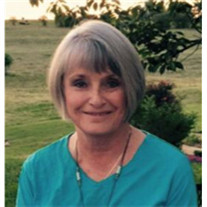 Ann Glass Ragle-Haynes, age 67, of Lula, GA passed away, Friday, November 9, 2018. She was preceded in death by her father, John Richard Glass, Jr. and mother, Margaret Tarlton Glass. Mrs. Ragle-Haynes is survived by her husband of ten years, David Gordon Haynes, Lula, GA; son and daughter-in-law, Brian and Stephanie Ragle, Bogart, GA; stepdaughter, Sandra Haynes Poisson and husband Peter Poisson, Cumming, GA; stepmother, Silvia Glass; six grandchildren, Zachary Ragle, Landon Ragle, Addyson Ragle, David Haynes, Elizabeth Poisson and Catherine Poisson; uncle, Charles Tarlton and wife Harriett; and several cousins. Mrs. Ragle-Haynes was born on October 8, 1951 in Atlanta, GA. Mrs. Ragle-Haynes was of the Presbyterian faith. She was a 1969 graduate of Grady High School, Atlanta, GA, and loved the class reunions and being able to keep up with her school friends on Facebook. Ann also was a graduate of Gwinnett Technical College earning a degree in accounting. Ann began her work career at C&S National Bank as a Teller, then went work at Georgia Power following in the footsteps of her Grandfather and Father. She then became the Director of Client Services for Dr. Richard Kaine at Quality Management Resources for more than 12 years. When QMR relocated out of state she became a Realtor in the Buford area. In addition, Ann was a Dance Instructor and Choreographer for Emory University's Center for Life Long Learning for over 28 years where she taught ballroom, line, swing and dancing for brides and grooms. She had many interests outside of her career, family being the most important of all. Ann had a deep love of her family. She was thrilled when the Grandchildren called her Memommy, a name which continues to this very day. She was a camper, kayaker, a lover of animals and all things outdoors, sharing each with her son and then her grandchildren. She also enjoyed her dancing as the leader of the Cotton Cloggers for more than 15 years. The Cotton Cloggers entered various clogging competitions and performed all over Georgia and the southeast at various venues including Stone Mountain Park. They also performed at the New Orleans World Fair in 1984. Ann was a Rotarian for the last 18 years which was very important to her because Ann always has had a heart for service to others. During those years she served Rotary at the Club and District levels. Most recently as District 6910 Public Image Director. Funeral services will be held on Wednesday, November 14, 2018, at 12:00 noon at the funeral home with Chaplain Lee Lovett officiating. Mrs. Ragle-Haynes will lie in state at the funeral home at 11a.m. till noon. Interment will be at 2:30 p.m. at Arlington Memorial Park, Sandy Springs, GA. The family will receive friends from 4:00 p.m. until 8:00 p.m. on Tuesday, November 13, 2018 at the funeral home. Flowers are accepted or donations may be made to an animal shelter of your choice, Shelter Box: www.shelterbox.org or The Rotary Foundation: www.Rotary.org.

The family of Ann Glass Ragle-Haynes created this Life Tributes page to make it easy to share your memories.