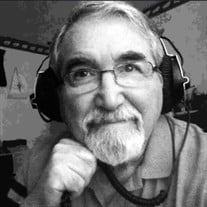 Anthony Richard Socci, “Tony", 82, of Lawrenceville, Georgia, and a native of Auburn, New York, passed away unexpectedly at his home on March 6, 2022. Born on February 15, 1940, in Auburn, NY, Tony was the fifth of six children of Anthony T. Socci and Louise Savarese. Tony graduated from East High School in Auburn, NY, where he played trumpet in the band. He earned a B.S. in Industrial Arts Education from State University of New York at Oswego. He continued his art and photography education at Syracuse University and University of Buffalo. After teaching school for several years, Tony opened “Anthony R. Socci…Celebrating Life through Photography”, a premier portrait, wedding, and product photography studio in the Finger Lakes. He operated his business from his home studio for more than 40 years, and was honored to photograph so many friends and family members on their wedding days. He photographed people in all stages of life—from births, birthdays, engagements, weddings, and after death—and was humbled to be invited to be part of so many other family’s significant life moments. A highlight of his photography career was meeting and photographing Rod Serling at his home on Cayuga Lake in the Finger Lakes, just before Mr. Serling’s unexpected passing in 1975. Tony’s photos were the last professional ones taken of the famous screenwriter and host of the television series, The Twilight Zone. Tony spent 65 years of his life in Auburn, NY, before moving to the Atlanta area in 2005 to be near his only daughter, Karla, and her family. Tony was a published author, writing for a variety of news and magazine publications; an accomplished sailor; a licensed private pilot; an experienced downhill skier; and a talented guitarist, musician, and vocalist. He sang and played guitar with his three sisters for many years at their churches in Auburn and Owasco, NY, and he was a member of two choirs at St. John Neumann Catholic Church in Lilburn, GA, singing and playing guitar alongside his daughter, Karla. For the last two years, Tony was a parishioner at Prince of Peace Catholic Church in Flowery Branch, GA, where he played his guitar in the choir and was a leader for Alpha adult religious education. Tony loved to fly, sail, ski, take pictures, and play one of his many guitars, ukuleles, and piano. He attended all of his daughter’s school band and choir concerts; chaperoned her high school marching band trips; and acted in musicals with her at the Skaneateles Summer Theatre in the Finger Lakes. Tony loved life and lived it to the fullest every day. He never met a stranger, and took great pleasure in trying to bring a smile to the faces of everyone he met, whether it be in the grocery store, a restaurant, or a busy doctor’s office. Along with music, Tony’s greatest joys in life were his daughter, Karla, and granddaughter, Antonia. He never missed a single dance recital, performance, or any other event they were in, and took thousands of photos of them over the years. Most recently, he picked up Antonia from school each day so he could give her a driving lesson on their way home. He planned to give Antonia keys to his car on her upcoming 16th birthday. Tony is survived by his daughter, Karla Socci Somers, and granddaughter, Antonia Somers, both of Lawrenceville, GA; his ex-wife and closest friend, Joyce DeSarro Socci, also of Lawrenceville, GA; his youngest sister, Frances E. Dulcich and brother-in-law, Peter F. Dulcich, of Camillus, NY; brother-in-law, Virgil H. Switzer of Owasco, NY, and sister-in-law, June Cayey, of Auburn, NY. Tony is also survived by many nieces, nephews, and cousins. Tony’s older brother (June’s husband), James C. Socci, passed away after a long illness on March 9, 2022, just three days after Tony. Preceding Tony in death are his parents, Anthony and Louise; his oldest brother, Thomas G. Socci; his two sisters, Mary Lou Switzer, and Carmela M. Socci, along with many aunts, uncles, cousins, nieces and nephews. A Catholic Funeral Mass will be held at Prince of Peace Catholic Church in Flowery Branch, GA, on Wednesday, March 16, 2022, at 2:00 pm. A reception will follow at the church at 3:30 pm for the family to greet guests. There will be a Mass in Upstate New York and interment of Tony’s ashes at a later date. Flowers or contributions may be sent to Prince of Peace Catholic Church, 6439 Spout Springs Road, Flowery Branch, GA 30542, or online https://www.popfb.org/give Contributions may also be made to Tony’s favorite charity, Francis House, 108 Michaels Ave., Syracuse, NY 13208, or online https://francishouseny.org

Anthony Richard Socci, &#8220;Tony", 82, of Lawrenceville, Georgia, and a native of Auburn, New York, passed away unexpectedly at his home on March 6, 2022. Born on February 15, 1940, in Auburn, NY, Tony was the fifth of six children of Anthony... View Obituary & Service Information

The family of Anthony "Tony" Richard Socci created this Life Tributes page to make it easy to share your memories.