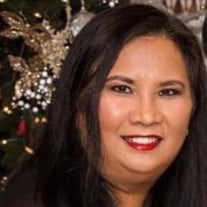 On May 4th, 2022, Arminda “Mimi” Schmidt (Domdoma), loving wife, mother, sister, and friend, passed away unexpectedly at 54. She was born on July 5th, 1967 in Manila, Philippines, daughter of the late Eduardo Domdoma Sr. and Teresita (Ochoa) Barreto. Mimi married Andrew Schmidt on May 8, 1993. Mimi grew up in San Andres, Manila, and studied at Saint Anthony School and Letran University. Mimi moved to California in 1986 to create a better life for her family. She met Andy while living in California, eventually moving to Wisconsin, before finally settling in Georgia in 1992. Mimi had a passion for animals and crafts. She was a loyal, avid fan of the Green Bay Packers. She was known for her quick wit, her ability to make anyone in a room a friend, and her drive. Mimi was well-known for her cooking, throwing annual BBQ and Christmas parties, that many of those who knew her looked forward to. She began working at AT&T in 1987 and worked until her retirement in 2021. In her nearly 34 years, she became a Senior Project Manager overseeing many important projects. She made hundreds of friends throughout her years at AT&T. Mimi is survived by her husband of twenty-nine years, Andrew “Andy” Schmidt; daughter, Amanda Schmidt and her fiancé Sean Serpe; mother, Teresita “Tess” Barreto; step-father, Jesus “Jess” Barreto; brothers, Jun (Malou) Domdoma, Alex (Diane) Domdoma, and Christopher Domdoma; sisters, Shella (Mark) Domdoma and Cate (Mike) Domdoma; brother-in-law, Mike (Julie) Schmidt; sisters-in-law, Lisa Kasperek, Katie Schmidt, and Kari (Alan) Kassoff; and numerous other relatives and friends. She was preceded in death by her father, Eduardo Domdoma, Sr.; mother-in-law, Alice (Vogt) Schmidt; father-in-law Jerome Schmidt; and brother-in-law Kevin Kasperek. Visitation will take place on Friday, May 13 from 6:00 p.m. until 8:00 p.m. at Flanigan Funeral Home in Buford, Georgia. Funeral Services will be held on Saturday, May 14, 2022 at 3:30 p.m. in the Chapel of Flanigan Funeral Home with Rev. Diosmar A. Natad officiating. Interment will be at Georgia National Cemetery in Canton, Georgia on Tuesday, May 17, 2022 at 11:00 a.m. In lieu of flowers, donations may be made to Gwinnett Humane Society or to ASPCA in memory of Arminda Schmidt.

The family of Arminda "Mimi" Schmidt created this Life Tributes page to make it easy to share your memories.