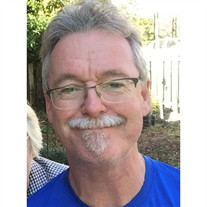 Barry Kirk Smith passed away on February 28, 2022 at The Phoenix at James Creek near Atlanta, GA following a rapid decline from early onset Alzheimer’s. He was born on December 26, 1958, in Pensacola, Florida, to Dr. Vernon L. and Janis A. Smith. Jan’s youngest son (and admittedly her prettiest baby), Barry is the fourth of five children. Early on his sibs nicknamed him “B-Kirk” though later in life he was called “Bear” or “Beak”. In Pensacola, Barry attended the Episcopal Day School, the Academy of Arts and Science and Catholic High School from which he graduated “Class of ‘76. Following high school, Barry attended the University of Florida for a few years. He eventually decided to pursue a career in hospitality and food service which fit his friendly and personable nature. Outside of Pensacola, Barry resided in Gainesville, FL, Nashville, TN, Key West, FL, and Martha’s Vineyard, MA, before returning to his hometown. In 2000 he married Gay Sherman and by 2004 they had settled in Pensacola and had a son, Chauncey. Barry returned to college at PJC to get a nursing degree and worked at both Baptist and Sacred Heart Hospitals. Barry loved to be outdoors and active. He had a life long interest in history and in his travels would seek out historic sites and museums to visit. His interests included swimming and surfing in the Gulf, saltwater fishing, hiking and biking, tent camping and walking. Barry loved his son Chauncey and enjoyed teaching him how to fish and showing him all the ways to enjoy the beach! He got along great with children as well as tenderly caring for the many pets he had over the years. His nieces and nephews loved when Uncle Beak came to town because he was so much fun! Around the house Barry enjoyed working in the yard, gardening and fixing things around the house. He had a knack for raising vegetables and volunteered with the Green Thumbers at St. Christopher’s. Barry was on site daily for “quality control” during the construction of the family’s beach house following the destruction of the original cottage by Hurricane Ivan in 2004. He was skilled in the kitchen and loved to eat Southern cuisine. During the Christmas holidays he made pounds of almond toffee to give away to friends and colleagues at the hospital. Barry was a true blue (and orange) UF Gator fan, a loyalty shared with his mom, brother Cuda, cousins, aunts and uncles. Spiritually, Barry found connections in Nature, communion through love of family and support from his Courage at Noon group. Barry accompanied his mother to Sunday services at St. Christopher’s before moving into assisted living in Tallahassee in 2020. He is preceded in death by his father, Vernon (Smitty) and is survived by his mother, Janis; son, Chauncey; former wife, Gay; and siblings Candace, Rhett, Kent (Cuda) and Gregg. A Celebration of Life will be held in Pensacola at St. Christopher’s Episcopal Church, Sunday, March 13 at 2:00pm. When attending please be mindful of each other’s health by proper masking and social distancing. In lieu of flowers please consider a donation to the Rosalynn Carter Institute for Caregiving, https://rosalynncarter.salsalabs.org/support-rci

Barry Kirk Smith passed away on February 28, 2022 at The Phoenix at James Creek near Atlanta, GA following a rapid decline from early onset Alzheimer&#8217;s. He was born on December 26, 1958, in Pensacola, Florida, to Dr. Vernon L. and Janis... View Obituary & Service Information

The family of Barry Kirk Smith created this Life Tributes page to make it easy to share your memories.