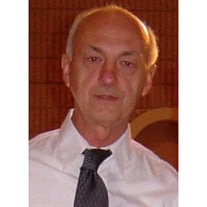 Benedict Ulysses (Paul) Kubeck, age 77 of Hoschton, GA, passed away on 10/11/2017 in his home surrounded by his family. A small, private family viewing will be held on Monday, October 16, 2017 at Flanigan Funeral Home, followed by a Celebration of Life Mass at Prince of Peace Catholic Church, 6439 Spout Springs Rd, Flowery Branch, GA 30542 at 11:30 a.m. with Father Branson officiating. Benedict was born of Margaret Kashinsky and Ignacas Kubeck on June 29th, 1940. He attended high school at Archbishop Hoban High School in Akron, OH. He graduated in 1958. He was an altar boy and played guitar in the church band. He worked for and retired from the United States Postal Service after 42 years of service. It was at the post office where he met his wife, Mary Kubeck. He spent the last 5 years of his career as the Postmaster of the Oxford, North Carolina Post Office after relocating from Ohio to North Carolina in 1988. He really enjoyed bowling and participated in numerous bowling leagues over the years, where he won many "jackpots" for his high bowling scores. He was also an avid golfer and fisherman. He could be found many days after work at Baker's Acres Golf Course in Tallmadge, Ohio. After moving to NC, he made Finley Golf Course in Chapel Hill his course of choice. He spent his weekends in Ohio on his small boat fishing on different waters throughout Ohio. He regularly attended Prince of Peace Catholic Church after moving from North Carolina to Georgia to be closer to his grandchildren. Ben is survived by his wife, Mary Kubeck of Hoschton, Ga, as well as his children Pamela Buzbee, Debbie Megenhardt, Matthew Kubeck, Michael Kubeck, Mary Kerpics, Jean Kubeck, Joe Kubeck, Jim Kubeck, and John Kubeck as well as many grandchildren. He is preceded in death by his parents Margaret Kashinsky and Ignacas Kubeck as well as his siblings Valeria Delores Dodd, Ingacas "Jimmie" Kubeck, Alice Kubeck Armstrong, Frank Kubeck, Edward Carl Kubeck, and Elizabeth Kubeck. In lieu of flowers, memorial donations may be made to Homestead Hospice at 1080 Holcomb Bridge Rd, Building 200, Suite 100 Roswell, GA 30076. The family wishes to thank Dr. Steven T Prior of Cumberland Palliative Center for his support and assistance during his last year of life.

Benedict Ulysses (Paul) Kubeck, age 77 of Hoschton, GA, passed away on 10/11/2017 in his home surrounded by his family. A small, private family viewing will be held on Monday, October 16, 2017 at Flanigan Funeral Home, followed by a Celebration... View Obituary & Service Information

The family of Benedict U. Kubeck created this Life Tributes page to make it easy to share your memories.