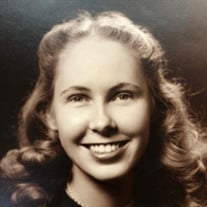 Mrs. Betty Nell Ford Loome, of Falls Church, VA and Moultrie, GA, died on August 12, 2021 surrounded by her family. Mrs. Loome was born on January 2, 1926 in Pharaoh, Oklahoma to John and Emma Ford. She was reared in the town of Henryetta with her sisters, Kathryn and Irma, during the Great Depression. She graduated from the Oklahoma College for Women in 1947 with a Bachelor of Arts degree, and began her professional life as a medical technologist. She married Army Lt. James R. Loome, a West Point graduate, in 1949. Throughout their 53 year marriage, Betty accompanied her husband on his various assignments in the United States and Europe, and supported him during his war-time duty in Korea and Viet Nam. Throughout the years, she and her husband travelled extensively, including to Turkey, Egypt, the Baltics, Croatia, Russia, China, Hong Kong, four Latin American countries, and much of Western Europe. Their home was filled with pieces from around the world. Together they raised three daughters and one son. In 1952, Betty began her teaching career. She spent 35 years in public school classrooms in Oklahoma, Colorado, New York, Pennsylvania, Texas and Virginia. In 1972, she earned her Master of Education degree from the University of Virginia, and dedicated the last 15 years of her career to being a reading specialist in Arlington County, Virginia. She retired 1987. Jim and Betty retired from the Army in 1972 and joined their civilian community. Mrs. Loome was active in leadership in the Arlington Retired Teachers Association, Reading is Fundamental, the American Association of University Women, and the Falls Church Presbyterian Church. She and her husband were active members of the West Point Society of Washington, D.C. and supported the performing arts as regular attendees of performances by the Arlington Symphony and at the Kennedy Center. They volunteered as poll workers and delivered for Meals-on-Wheels. They moved to Moultrie, GA in 2003 where Betty volunteered as a school mentor, supported the YMCA, and was an active member of First Presbyterian Church. She was the loving center and key communicator of a large and dispersed family. She lavished her grandchildren with books, hand-made clothing, and adventures to museums and galleries at the Smithsonian. She was an avid reader, life-long scholar, and excellent bridge player, and through bridge made lasting and loyal friendships. She was feted by a family gathering of 42 on her 90th birthday. She never missed sending a timely birthday card to her many loved ones. She drove a car and traveled by plane until she was 95. Betty is pre-deceased by her husband, retired Army Colonel James R. Loome, her sisters Kathryn Ford Payne and Irma Ford Stockton, and son-in-law Paul Matthews. She is survived by children Linda Loome Schwartz of Marietta, GA, Jennifer Loome Marion of Moultrie/Buford, GA, Margaret Loome Matthews of Princeton, NJ, and James L. Loome of Clinton, MS; as well as their spouses, Greg Schwartz, Ben Marion and Nancy D. Loome. She also loved eight granddaughters: Brittany S. Hapner, Tiffany S. Small, Sarah M. Hales, Jessica Schwartz, Maryanne Matthews, Margo Matthews, Susan L. Cowan, and Jennifer Loome. She loved six grandsons: Ben Marion, Jr., Ryan Matthews, Adam Marion, Gregory Schwartz, Samuel Marion, and Jack Loome. She leaves 18 great-grandchildren. She is also survived by cousin Ann Rutledge and nieces Sara Kinnee, Rebecca Duncan, Kathryn Stockton, Deborah Stockton, and nephew John McMann. Due to the pandemic, a service at First Presbyterian Church in Moultrie, GA has been postponed until October or later. Another service at Arlington National Cemetery will be held around June, 2022 at which time she will be laid to rest next to her husband. In lieu of flowers, donations may be made in her name to the YMCA of Moultrie, GA.

Mrs. Betty Nell Ford Loome, of Falls Church, VA and Moultrie, GA, died on August 12, 2021 surrounded by her family. Mrs. Loome was born on January 2, 1926 in Pharaoh, Oklahoma to John and Emma Ford. She was reared in the town of Henryetta... View Obituary & Service Information

The family of Betty Nell Loome created this Life Tributes page to make it easy to share your memories.