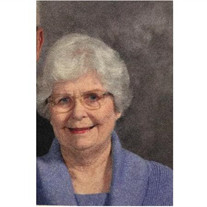 Betty Jean Thompson Smith (Mrs. Paul C. Smith) resident of Hoschton, GA and formerly of Auburn, Alabama passed away on May 20, 2020. Mrs. Smith was born in Clark County, Kentucky, the daughter of Robert H. and Onys Ragland Thompson and sister of Rodney J. Thompson. Always an active and musical child, she participated fully in her local church and as an adolescent she accompanied the congregation on the piano and initiated Vacation Bible School for her local community in the summer. After graduating from Clark County High School, she received her BA in education from Eastern Kentucky University where she was active in the Baptist Student Union and met her sweetheart and future husband Paul Clay Smith. They were married in July 1957 while he was in veterinary school at Auburn University. They became the parents of three children: Susan Jane Smith-Stefaniuk (W. Gordon Stefaniuk), Robert Clay Smith (Rhonda), and Leigh Anne Smith Day (Michael Day). “Miss Betty and Dr. Paul” traveled extensively while raising their family, living in Bangkok, Thailand for three years. While there they both worked: he for the US Army at SEATO Medical Research Labs and she for the International School, teaching fourth grade at the Bang Sue campus. They discovered their deep love for international missions and international students, teaching English as a second language while sharing God’s love. When they returned to the USA, they moved their family to Iowa and continued to be involved with international student work. They also taught Sunday School in their local Baptist church as a couple. While in Iowa, Mrs. Smith started a community interdenominational Bible study group for women. On moving to Auburn in 1981 she began another Bible study group for women which has met continuously since then. Mrs. Smith pursued graduate studies at the University of Kentucky, University of Maryland, and the University of Tennessee. She taught school in Kentucky, Alabama, Tennessee, and Iowa as well as Bangkok, Thailand and East Africa. Her most rewarding job opportunity came when she joined the Auburn City School System as Attendance Supervisor and Social Services Director. For eight years, she worked closely with the schools and the juvenile court to assist families embroiled in socioeconomic challenges. She received recognition for this work from the school board as well as from the Auburn University Educational Fraternity. Miss Betty left that position when she and her husband were appointed as two year mission volunteers by the International Mission Board of the Southern Baptist Convention, and they served in that capacity for over two years in both Tanzania and Kenya; while there she taught seminary classes in English and mentored both American and national families as the perpetual hostess and surrogate grandmother of both missions. When the Smiths returned to Auburn, Alabama, Miss Betty joined Dr. Paul as he continued their travels and mission lifestyle which extended from Ukraine to Grenada and many other countries. When at home in Auburn, she taught English as a second language to Korean women, and supported the local Bible study for women in jail. When Mrs. Smith and her husband finally retired, they left Auburn to reside in Hoschton, GA closer to their children and grandchildren. She is survived by her grandchildren Erin Elizabeth Day Dunbar (Jordan), Robin Leigh Day Curtis (Danny), Stephen Michael Day; Brittany Lee Ann Miller (Erick) and their children Kian and Kara, Austin Wayne Cleveland, Gabrielle Marie Etzell, and Abigail Elizabeth Smith; Allyson Stefaniuk (Brian) and their daughter Arya, Andrew and his son Conner, Alexander Stefaniuk, and Thomas Stefaniuk (Jasmine). She also enjoyed her membership in PEO, a philanthropic educational organization for women. She was a member of Chapter E in Auburn and Chapter BO in Braselton, GA where she served as chaplain. She was an active member of Celebration Church in Hoschton, GA, teaching Sunday School there in her role which had extended over more than sixty years. This was but one more expression of her deep and abiding love for the Lord Jesus Christ and His church. A graveside service in Auburn, Alabama will be held for family and close friends on Sunday, May 24, 2020 at 2:00 CDT at the pavilion at Town Creek Park Cemetery, with interment for family only. A visitation service will be held at Flanigan Funeral Home in Buford, GA on Saturday, May 23, 2020 from 4:00 p.m. until 8:00 p.m. The family requests that attendees wear a mask and that there be no hugging or handshakes. A memorial service will be held at a later date. In lieu of flowers the family requests that gifts be designated to the Building Fund or the Buildings and Grounds Maintenance Fund of Celebration Church, Hoschton, GA.

The family of Betty Jean Thompson Smith created this Life Tributes page to make it easy to share your memories.