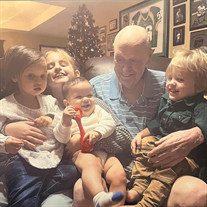 Bill McDaniel, 81, of Buford, GA passed away on Friday, May 13, 2022. He was preceded in death by his wife, Sally Berry McDaniel; parents, Emmy and Ethel Freeman McDaniel; sisters, Lucille McDaniel, Blanche Brownlee, Lois Strickland; brothers, Robert McDaniel, Alfred McDaniel, and Neil McDaniel. Mr. McDaniel is survived by his son, Steve (Rena) McDaniel of Buford; grandchildren, Andrew and Victoria Kellogg of Buford, and Dorothy and Roberto Almeida of Gainesville, GA; four great grandchildren, Charleigh Kellogg, Caleb Kellogg, Maiah Almeida, and Roberto Stephen Almeida; and several nieces, nephews, and cousins. Mr. McDaniel was born on April 5, 1941 in Dacula, GA. He received his education at Dacula High School, and was owner of McDaniel Hauling in Buford. Mr. McDaniel was a veteran of the U. S. Army and was a member of Buford American Legion Post 127. He enjoyed fishing and he loved and adored his grandchildren and great grandchildren. Family was very important to Bill. Funeral Services will be held on Monday, May 16, 2022 at 11:00 a.m. in the Chapel of Flanigan Funeral Home with Rev. Frank Pratt officiating. Interment with Military Honors will follow at Broadlawn Memorial Gardens in Buford. The family will receive friends on Sunday, May 15 from 2:00 p.m. until 6:00 p.m. at the funeral home.

The family of Bill McDaniel created this Life Tributes page to make it easy to share your memories.