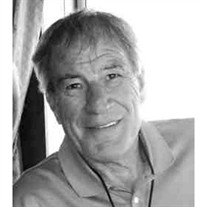 Jimmy Bodkin Smith, 72, died peacefully on January 22, 2016, with his wife and two children at his side. The only child of James Ross Smith and Thelma Bodkin Smith Brown (both deceased), Bodkin was born and raised in Chattanooga, Tennessee. He was a 1962 graduate of East Ridge High School, attended the University of Tennessee in Knoxville, and received his B.S. degree in economics from the University of Chattanooga, where he was a member of Kappa Sigma. He married Beverly Ann Brown in 1966, and they moved to Atlanta in 1968 when he accepted a position as Banking Software Manager at Management Science America. In 1972 he joined Consultec, an Atlanta-based information technology and services company, where he retired as Vice President of Sales and Marketing. Bodkin loved to travel, and he and Beverly enjoyed several trips and river cruises in Europe and most recently toured Ireland where he posed in Galway with the flag of the Bodkin tribe. He enjoyed spending time with family and friends, golfing, fishing, and model railroading. He was a fan of classic country music and SEC football, always supporting his UT Vols. He will be forever loved and missed by his wife Beverly, daughter Karen Smith Campbell (and husband Jeff) of Suwanee, Georgia, son Gregory Bodkin Smith (and wife Leslie) of Cary, North Carolina, and seven cherished grandchildren--John Wesley (Trey) Campbell, III, Scott Bodkin Campbell, Samantha Ann Campbell, Allison Lee Campbell, Caroline Anne Smith, Lucy Claire Smith, and Jack Bodkin Smith-and also his beloved brother-in-law, Peyton R. (Pete) Brown, Jr., of Knoxville, Tennessee, and two nieces. A Celebration of the Life of Bodkin Smith will be held on Saturday, January 30, at 2:00 p.m. at Flanigan Funeral Home and Crematory, 4400 South Lee Street, Buford, Georgia 30518. The family will receive visitors during the hour before and the hour after the service. In lieu of flowers, the family requests donations in Bodkin's memory to the Cancer Research Institute, One Exchange Plaza, 55 Broadway, Suite 1802, New York, NY 10006. Donations may also be made at www.cancerresearch.org or by calling 800-992-2623.

Jimmy Bodkin Smith, 72, died peacefully on January 22, 2016, with his wife and two children at his side. The only child of James Ross Smith and Thelma Bodkin Smith Brown (both deceased), Bodkin was born and raised in Chattanooga, Tennessee.... View Obituary & Service Information

The family of Bodkin Smith created this Life Tributes page to make it easy to share your memories.