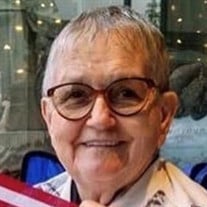 Mrs. Brunhilde (Bender) Murphy, age 84, of Lawrenceville, GA passed away under the care of Hospice on Friday, August 13, 2021. Brunhilde, or as many knew her, “OMA”, grew up in a small town in Germany. She graduated high school and began training and working in hotel kitchens where her love of cooking grew. She eventually became a Nanny and took care of senior officer’s children and families while they were stationed in Germany and, some of which she was still in contact with to this day. During this time she met and married her husband Bill. In 1960 she was granted a visa to enter the United States with her daughter and move to Michigan. Brunhilde and Bill worked tirelessly as he built their house and she made it their home in Roseville. Brunhilde’s number one goal was for her and her daughter to eventually become United States Citizens and she did just that in July 1963. Her husband, William Murphy, brother, Erich and her parents Emil and Helena Bender, preceded her in death. Brunhilde is survived by her children, Marion (Rich) Osborne of NC; Michael (Theresa) Murphy of MI; Mark Murphy of MI; Michella (Bill) Palaski of GA; Monica (Ken) Bergler of MI; grandchildren, Amanda Palaski, Ashley (Bill) Scruggs, Allison Palaski, Benjamin Murphy, William Bergler, Kyle Bergler, Logan Bergler; great grandchildren, Edith Scruggs and Finnegan Scruggs, her brother, Rudolf Bender of Germany, Sister-in-laws in Germany and Michigan and numerous nieces, nephews. Brunhilde was a “Room Mother” to her children when they were in grade school, a Girl Scout Leader and started her own catering business. She loved her country and was actively involved in her local government. She enjoyed cooking and baking, gardening, needle point, knitting and crochet, as well as being a loving wife and mother to her children. She retired as the kitchen manager and head cook from Roseville High School in Roseville, MI. No formal service is scheduled at this time. A “Celebration of Life” service will be scheduled for a later date. In lieu of flowers, donations can be made In Memory of Brunhilde Murphy to an organization of your choosing or one of the following: Homestead Hope Foundation, 10888 Crabapple Rd., Roswell, GA 30075 (They provided her Hospice Care) (Website https://www.homesteadhopefoundation.org) Alzheimer’s Association, P.O. Box 96011, Washington, DC 20090-60 (you can select a chapter in your area) (Website https://www.alz.org.)

Mrs. Brunhilde (Bender) Murphy, age 84, of Lawrenceville, GA passed away under the care of Hospice on Friday, August 13, 2021. Brunhilde, or as many knew her, &#8220;OMA&#8221;, grew up in a small town in Germany. She graduated high school and... View Obituary & Service Information

The family of Brunhilde Bender Murphy created this Life Tributes page to make it easy to share your memories.