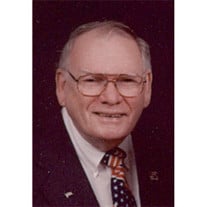 C. Glenn Hartley, age 83, of Sugar Hill, GA passed away on Tuesday, February 10, 2015. He is survived by his wife of fifty-nine years, Mildred Finley Hartley; children, Renee and Chuck Boone, Lawrenceville, GA, Glenda and Randy Gunter, Oviedo, FL, and C. Glenn and Robin Hartley, Nashville, TN; grandchildren, Chad and Chandra Boone, Ashley and Andrew Tillman, Jenny Gunter Reeves and husband, David Reeves, Samantha Hartley, Sydney Hartley, and Erika Hartley; three great grandchildren, Dourden Boone, Addison Reeves, and Kate Reeves; brother and sister-in-law, E. Don and Carolyn Hartley, Birmingham, AL; and numerous nieces, nephews and cousins. Mr. Hartley was born January 6, 1932 in Allgood, AL. He was a 1950 graduate of Blount High School in Allgood and attended Snead Community College in Boaz, AL. He was retired from Allstate Insurance as a commercial fire underwriter after thirty-six years of service. For nineteen years he worked as a doorman for the House of Representatives at the Georgia Capitol. For ten years, he was a poll manager for Gwinnett elections. After retirement, he worked as a greeter for the Kroger store in Dunwoody, GA. He was a member of the Citizen Fire Academy in Gwinnett County and was former secretary and treasurer of Fire Mark Circle of the Americas. He was a Mason and member of Five Points Lodge No. 897 F.A.M. He was raised in Lodge on November 1, 1954 in Birmingham. He was an active member of Harmony Baptist Church in Buford and a member of the Silvertones Choir at First Baptist Church of Buford. He was a former member of Skyland United Methodist Church in Chamblee, GA where he was a former Sunday School Teacher. He was a member of both Hardee's and Bojangle's breakfast clubs in Buford. Funeral services will be held at 1:00 p.m. on Saturday, February 14, 2015 in the Chapel of Flanigan Funeral Home with Rev. Farrell Presley, Honorable Wendell Willard, and Rev. Brian Satterfield officiating. Masonic graveside service and interment will follow at Peachtree Memorial Park Mausoleum in Norcross, GA. The family will receive friends at the funeral home on Friday, February 13, 2014 from 4:00 p.m. to 8:00 p.m. Flowers accepted or memorials may be made to Harmony Baptist Church Building Fund, 2988 N. Bogan Road, Buford, GA 30519.

The family of C. Glenn Hartley created this Life Tributes page to make it easy to share your memories.