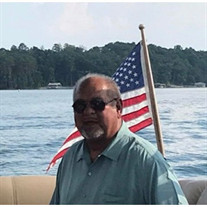 Charles Ebb Scott, age 68 of Buford, GA, passed away on Tuesday, October 30, 2018 at Northeast GA Medical Center. He was preceded in death by his mother, Gladys Maddox Scott; father, Charlie Frank Scott; stepmother, Elizabeth Jones Scott; brother, Van Scott, and brother-in-law, Danny Sexton. Ebb is survived by his wife of forty-seven years, Anita Sexton Scott of Buford; sons and daughters-in-law, Andy and Brook Scott of Buford, Nathan and Christy Scott of Braselton; three granddaughters, Avery Scott, Rylee Scott, and Sadie Scott; sister and brother-in-law, Sonya and Bill Miles; sister-in-law, Jody Smith Scott; mother and father-in-law, Charlotte and Ray Sexton; and several aunts, uncles, cousins, nieces and nephews. Ebb was born on June 29, 1950 in Buford, GA. He graduated from North Gwinnett High School in 1968. He served in the US Navy, and was retired from General Motors with thirty years of service, where he was a member of the U.A.W. Local #10. Ebb was a member of Ivy Creek Baptist Church in Buford. He was a Mason and a member of the Buford Lodge #292 F & AM, as well as the Commandry and Royal Arch Chapter #48. He was a Shriner and member of the YAARAB Temple of Atlanta, GA, and was also a member of the Volunteer Fire Department in Buford, GA. Funeral services will be held on Sunday, November 4, 2018 at 2:00 pm in the Chapel of Flanigan Funeral Home in Buford, GA, with Dr. Jim Ferguson and Rev. Bobby Brown officiating. Interment with Masonic Rites will follow at Broadlawn Memorial in Buford. The family will receive friends on Saturday, November 3 from 1:00 pm until 8:00 pm at the funeral home, and again on Sunday from 11:00 am until time for the service at 2:00 pm. Flowers are accepted or donations may be made to Northeast Georgia Medical Health System, Gainesville, GA in memory of Charles Ebb Scott.

The family of Charles Ebb Scott created this Life Tributes page to make it easy to share your memories.