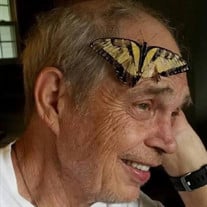 Charles Jefferson Spraggins (Papi), age 71, of Buford, GA, passed away Tuesday, December 15, 2020. He was born January 22, 1949 in Rome, Ga. He was preceded in death by his father, Charles Raymond Spraggins and brother Robert Nelson Spraggins. His is survived by his mother Sue Flowers Spraggins. Lithia Springs, GA. and brother James Nathaniel Spraggins, Lithia Springs, GA. He leaves behind to cherish his memory his wife of 48 years, Carolyn Cook Spraggins, Buford, GA, his sons and daughter-in-law Charles Jefferson Spraggins, JR, (C.J.), Buford, GA, and Johnathan Nathaniel Spraggins (Nat) and his wife Alicia Speir Spraggins, Sugar Hill, GA, along with their two children Teagan Naomi Spraggins and Jackson Nathaniel Spraggins, Sugan Hill, GA. A host of aunts and uncles, nieces and nephews and cousins will also cherish his memories. He was dearly loved by all friends and neighbors alike. We were all blessed to have him be a part of our lives. A memorial service will be planned for a later date. Those who wish to honor his memory may make a contribution to ASPCA - American Society for the Prevention of Cruelty to Animals.

The family of Charles Jefferson "Papi" Spraggins created this Life Tributes page to make it easy to share your memories.