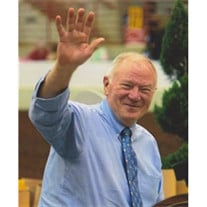 Clarence the Angel once said, "No man is a failure who has friends." Those words epitomize the life of Dale Maxwell Stone, Jr. of Buford, GA who passed away suddenly on March 30th 2019, at the age of 78. He was a native of Toccoa, GA, born on October 22nd, 1940, but was raised in Rome, GA. He was known affectionately as Dale Jr., Bubba, Sonny, Daddy, and Granddaddy. He was not a rich man but was supremely wealthy and successful when it came to family and friends who loved him and whom he loved so very much. He was a simple man who never owned a smartphone, never had an email address, and never Googled anything. He loved his wife, his family, Georgia Bulldog football, the Atlanta Braves, his alma maters: Darlington School, Georgia Military College, and North Georgia College (now UNG), his horse show friends, frozen yogurt, and animals of all kinds but especially dogs, cats, and baby ducks. He was a regular donor at the American Red Cross, donating gallons of blood throughout his life. Additionally, he loved being a volunteer at Egleston Children's Hospital. He was a dedicated athlete, playing college football and baseball as well as men's softball at church. He was a "jogger" who ran numerous Peachtree Road Races, 10K races, and half-marathons. Dale could often be found jogging around Stone Mountain two times in one evening (10 miles). He adored coaching his daughter in softball and his son in football and baseball. He was a terrific swimmer and tennis player. However, if you asked Dale whom he loved the most, his answer would be his Lord and Savior Jesus Christ in whose Presence he peacefully resides at this moment; we are certain. Dale Jr., like his father Dale Sr. (who was one of the first organists to play the "Mighty Mo" at the Fox Theatre), was a supremely talented musician. However, unlike his father, Dale did not read music. He is probably best known as the Official Organist of the Atlanta Hawks from the early 1970s until the mid-1990s. Dale played one season with the Atlanta Braves and would often fill in as the organist for the Atlanta Flames hockey team. Still, Dale was probably most proud of his over 60 years spent playing the organ for horse shows all over the country, mostly in the Southeast. Additionally, he was loved by so many customers in his career as an office supply salesman. He had an amazing life and career. I tell you what to do. Dale was preceded in death by his parents, Dale M. Stone, Sr. and Lula Faith Terrell Stone. He is survived by his wife of 21 years, Barbara Lord Stone of Buford, GA; daughter Lori Dalaine Stone of Cumming, GA; son Jeffrey Dale Stone (Deanna) of Bremen, GA; and granddaughters Taylor Stone and Jacie Stone of Bremen, GA. He also leaves behind first wife Elaine Worthington Stone Tanner and her husband Sam Tanner (Dale's Bulldog Breakfast Club best friend) of Cumming, GA; sister Terri and brother-in-law John Whittenburg of Cartersville, GA; sister Diane Stone of Rome, GA; niece Anne (Darrell) Vaughan of Cartersville, GA; nephew Jack Whittenburg of Cartersville, GA; and numerous cousins, great-nieces, and great-nephews. Stepchildren include Brian Lord of Flowery Branch, GA; "Daughter #2" Kim (Peter) Knutzen of Blue Ridge, GA; and Kelly (Renee) Lord of Statham, GA. He also had many step-grandchildren and step-great-grandchildren. A Celebration of Life service will be held at 11 am on April 27th, 2019, at Mount Paran Church of God in Atlanta. The service will be followed by a visitation with family. In lieu of flowers, memorial donations may be made to St. Jude Children's Research Hospital (stjude.org) or to C.A.R.E.S. Cedartown Animal Rescue, Education & Sterilization (caresga.org), in memory of Dale M. Stone, Jr. Clarence also said, "Strange, isn't it? Each man's life touches so many other lives. When he isn't around, he leaves an awful hole, doesn't he?" Yes. There will be a hole in all our lives; however, every life he touched is better off for having known Dale.

Clarence the Angel once said, "No man is a failure who has friends." Those words epitomize the life of Dale Maxwell Stone, Jr. of Buford, GA who passed away suddenly on March 30th 2019, at the age of 78. He was a native of Toccoa, GA, born on... View Obituary & Service Information

The family of Dale M. Stone, Jr. created this Life Tributes page to make it easy to share your memories.

Clarence the Angel once said, &quot;No man is a failure who has friends.&quot;...