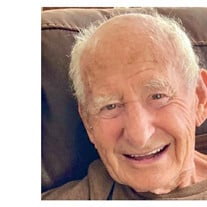 Daniel Lawrence Sullivan, born January 28, 1925, in St. Claire Shores, Michigan, passed away on January 5, 2021, at the age of 95 years. He was the third child of Loretta and John Sullivan. He was preceded in death by his brothers, John and Dewey, and sister’s Loretta, and Joanne. He was also preceded in death by his wife, Dorothy Alida Sullivan on March 19, 1965. Together, they had four children, Daniel Joseph, Daisy May, Dale Scott, and Denise Marie. His second wife, Sharon, then gave birth to Jeffery Michael. His third wife, Ruth, gave birth to Holly Elizabeth. All of his children are still living. Daniel has eleven grandchildren and nine great-grandchildren. Daniel was known as "Dad" and "Daddy" by his children because he was one of those rare men who was strong and yet loving. He was a seventh-generation of equestrians, spending most of his life working hard as a professional horseman, instructor, and Ferrier. His children had the gift of growing up learning about life while living on horse farms, climbing trees, walking fences, showing horses, falling off, and getting back in the saddle. With Dad's instruction and guidance, they learned about the rewards of hard work, perseverance, and resiliency. Daniel served in the United States Navy, enlisting in 1943 through 1945, during World War II. He was a First Class Seaman as a Crash Crew Fire Rescue at Camp Kearny California. He received the Accommodation Medal for his bravery at a crash site while serving there. He was immensely proud of being one of the last of the "Greatest Generation" still living. He wore his uniform proudly. His first job out of the Navy was working in the Detroit Chrysler Tank Plant for fifteen years. This work evolved into a position working on the Redstone Missle project, which preceded the first missiles into space. The plant project relocated in the early sixties due to a recession, however, Dad couldn't relocate with his job due to Dorothy being ill with leukemia. He rediscovered his passion for horses and his childhood expertise proved to be viable support for his family for the next seventeen years. Dad continued to support his family while living at various horse farms in Michigan and then Ohio. His children are very grateful for having the opportunity to grow up in the country, an important goal of Dad's, as he always believed children should learn about nature and horses. Daddy was so deeply loved. Rest in peace in your Lord's arms, Daddy, we love you. A graveside service with military honors will be held at Georgia National Cemetery in Canton on Thursday, January 14, 2021 at 2:00 p.m. with Rabbi Scott Sekulow officiating.

Daniel Lawrence Sullivan, born January 28, 1925, in St. Claire Shores, Michigan, passed away on January 5, 2021, at the age of 95 years. He was the third child of Loretta and John Sullivan. He was preceded in death by his brothers, John and... View Obituary & Service Information

The family of Daniel Lawrence Sullivan created this Life Tributes page to make it easy to share your memories.