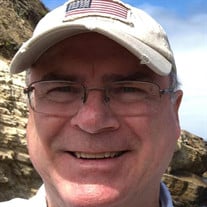 David Conray Angel, 68, of Clovis, CA, passed away on Easter Sunday, April 17, 2022 in Flowery Branch, Georgia. A memorial service will be held on Friday, May 27, at 10:00 am at Trinity Community Church, 12168 N. Willow, Clovis, California. David was laid to rest in Cumming, Georgia, where his wife Karen now lives with David’s brother, Doug, and wife, Nancy. David was born on October 31, 1953, in Victorville, California to June and Ray Angel. He went to school at American Christian College in Tulsa, Oklahoma, where he met his future wife, Karen Nelson. He and Karen married on August 16, 1975 in Fresno, California. He graduated from college with a degree in History and Biblical Studies. He worked as a self-employed insurance agent for over 40 years. David enjoyed riding his motorcycle with his sons and his best friend over the years, hunting, participating in competition shooting and traveling. He loved his family deeply and enjoyed spending time with his grandkids whenever he could. David is preceded in death by his mother, June Fackrell. David is survived by his wife, Karen Angel, to whom he was married for almost 47 years; son Bryan Angel and his wife, Jaime, and their four sons, Ty, Carter, Colby, and Jackson; son Todd Angel and his wife, Amanda, and their two children, Sierra and a baby boy on the way; brother Doug Angel and his wife, Nancy; father, Ray Angel and his wife, Janet; and stepfather Rey Fackrell. In lieu of flowers, please consider sending gifts in David’s memory to Hume Lake Christian Camps, Hartland Christian Camp, or Legacy Coalition – Christian Grandparenting Ministry in care of George and Linda Posthumus Donations can be made online at https://www.aplos.com/aws/give/LegacyCoalition/GPosthumus David’s family wishes to extend their sincere thanks and appreciation to AseraCare Hospice in California, Amedisys Hospice in Georgia, Trinity Community Church, and to friends and family for their love and support.

The family of David Conray Angel created this Life Tributes page to make it easy to share your memories.