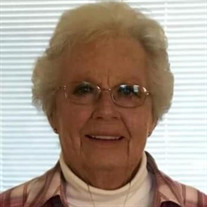 Dolores Strickland Gaddis of Dacula passed away on Tuesday, April 26, 2022. She was the daughter of Elmer and Mildred Strickland. She was born on January 26, 1937. She was predeceased by her loving husband, Harold, her parents, mother and father-in-law, Hubert and Virginia Gaddis, brothers Billy Strickland and Doug Strickland, several nephews who were her pride and joy. She had one son, Chris Gaddis, and was a mom to adopted daughter Evonne Gaddis Sheriff. She was also a mom and grandmother to two of her adopted grandchildren, Brandon Sheriff Gaddis and Brittany Sheriff Gaddis. She is survived by her son and his wife whom she loved as a daughter, Tracy Smith Gaddis and grandchildren, Brandon Gaddis, Adam Gaddis, Brittany Gaddis, Zak Gaddis, Kelsye Gaddis who was her friend as well as a granddaughter. One brother, Roger (Gaye) Strickland, Lawrenceville, GA. Three sisters-in-law, Jo Strickland, Athens, GA, Martha Strickland, Auburn, GA, and Juanita (Roger) Popp, Hull, GA. One niece and several nephews, cousins, great-nieces and nephews. Delores graduated from Dacula high school in 1955 where she played basketball and was on the team who won State Champs in 1954 and runner-up in 1955. She worked for Dunn & Bradstreet until she left to have her pride and joy, her son, Chris Gaddis. She then was employed by GA. Tech Purchasing as a clerk and worked her way up to become the First Female Director of Purchasing and was there until her retirement in 1996. She volunteered at schools during the high school of her son, then started again with grandchildren, at Fort Daniel, Dacula Middle school and Dacula High School. She held various positions in the PTA for each school, and coached girls recreation basketball for a number of years. She loved playing the organ and piano, which she played for numerous weddings and funerals. She was a member of Wood Grove Baptist Church where she was the organist. She loved her churches, Harmony Grove Methodist Church, Hog Mountain Baptist and Wood Grove and lastly Carnesville Baptist Church Visitation will be from 11:00 a.m. until 8:00 p.m. on Thursday, April 28, 2022 with the Funeral at 3:00 on Friday, April 29, 2022 in the Chapel of Flanigan Funeral Home, Buford, GA with Rev. Chris Gaddis and Rev. Jimmy Strickland officiating. Interment will follow at Gwinnett Memorial Park, Lawrenceville, GA. She was a loyal and devoted wife, mother and grandmother. She will be greatly missed by all who knew her. Honorary Escort will be Class of 1955 of Dacula High School.

Dolores Strickland Gaddis of Dacula passed away on Tuesday, April 26, 2022. She was the daughter of Elmer and Mildred Strickland. She was born on January 26, 1937. She was predeceased by her loving husband, Harold, her parents, mother and... View Obituary & Service Information

The family of Dolores Strickland Gaddis created this Life Tributes page to make it easy to share your memories.

Dolores Strickland Gaddis of Dacula passed away on Tuesday, April...