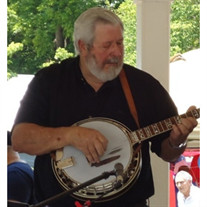 Donald (Don) Cantrell passed away Friday, January 2, 2015 at the age of 72. He was preceded in death by his parents Frank and Beulah Cantrell of Mt. Airy, GA. In addition to his parents, he was preceded in death by brothers Hudson, Floyd, Frank and Bill Cantrell; and sisters Geraldine Ward, Allie Hulsey and Jean Cantrell. He is survived by his wife of fifty years, Sue Lowery Cantrell; his children Greg Cantrell and daughter-in-law Jennifer Cantrell of Auburn, GA, and Karen Cantrell Gibson and son-in-law Chris Gibson of Savannah, GA; grandchildren: Garrison, Kaitlyn and Caroline Cantrell; Chase, Madison and Logan Gibson; sister, Jo Cantrell Jordan and several nieces and nephews. He was raised in Mt. Airy, GA. He retired from Lucent Technologies with more than twenty-five years of service. He enjoyed hunting, fishing and was an avid bluegrass fan and banjo player. After retirement, he and his wife traveled throughout the Southeast attending bluegrass festivals and enjoying their love of music with friends. Funeral services will be held Monday, January 5, 2015 at 11:30 a.m. at Hebron Baptist Church Chapel, Dacula, GA with Rev. Kevin Miller officiating. Interment will follow at Gwinnett Memorial Park, Lawrenceville, GA. The family will receive visitors at the funeral home on Sunday, January 4, 2014 from 2:00 p.m. to 4:00 p.m. and 6:00 p.m. until 8:00 p.m.

The family of Donald (Don) Cantrell created this Life Tributes page to make it easy to share your memories.