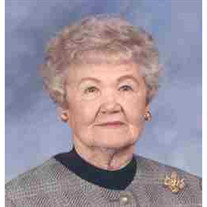 Mrs. Dorothy Aldridge Cansler of Flowery Branch, Georgia passed into the rewards of Heaven, February 16th at home following several months of illness. Mrs. Cansler was 96 years old. Dorothy was best known as Dot to all her friends and Granny Dot to all her grandchildren and great-grandchildren. She was preceded in death by her husband Reuben Manor ansler Sr. They were married for over 60 plus years. Dorothy was born April 14, 1916 to her parents, Claude and Ellen Aldridge at Surrency, GA. She graduated from Surrency High School and after working in Waycross met and married Reuben Cansler, a state patrol officer stationed in south Georgia. Dorothy was a mother, housewife, caregiver to her father, and later a beautician with a small salon located in her home. She was raised a Methodist, and later after marriage, joined the Baptist church. She loved her husband, her two sons, her church family, and most of all her Lord Jesus. Dorothy enjoyed also helping raise her grandchildren. Dorothy Cansler is survived by her sons and their wives, Rev. Ronald A. Cansler Sr. and Donna Cansler of Flowery Branch, Reuben M. Cansler Jr. and Peppe Cansler of Tampa, Fla. Her grandchildren are Rev Ron Cansler Jr and his wife, Melinda Cansler of Flowery Branch, Tracey Lynn and Mike Smith of Flowery Branch, April Dawn and Jeff Jenkins of Flowery Branch, Russ and Margie Cansler of Lexington, KY. One grandson Theron Brett Cansler passed away several years ago, one adopted granddaughter,Yvonne Nida and husband Charles Nida of Cartersville. Mrs. Dorothy Cansler was preceded in death by her four brothers, and one sister. She is survived also by several nieces and nephews, cousins, and nine great grandchildren. A service of celebration will take place at Flanigan Funeral Home, 4400 . Lee St., Buford, GA on Wednesday, February 20th at 1:00 PM with visitation on Tuesday night from 6:00 PM to 9:00 PM. A grave side service will be at 3:30 at the Resthaven Gardens of Memory in Dekalb County. Rev Ron Cansler Jr. will conduct the services. In lieu of flowers, donations may be made to the mission fund of Lanier Islands Community Church of Buford, Ga.

The family of Dorothy Aldridge Cansler created this Life Tributes page to make it easy to share your memories.