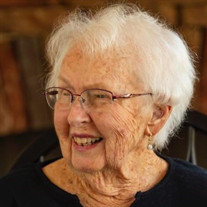 Dorothy Myers Dorothy Myers, age 100, entered her Heavenly Home on January 21, 2022. She was born in East Stroudsburg PA, to John and Annette Lebar. Dorothy, a WWII veteran, met her husband Walter Myers, also of Pennsylvania, in Berlin, Germany. After returning to the United States, they resided in Buffalo, NY and raised a family. After raising her children, Dorothy worked as a nurse at West Georgia Medical Center in LaGrange, GA and many years as a hospice nurse at Southwest Christian Hospice in Union City, GA. Dorothy enjoyed gardening, sewing, knitting and baking, but her greatest joy was her family. “It doesn’t get any better than this” she would often say when surrounded by her children. Dorothy was known for her sense of humor and witty comebacks. She instilled strong moral values in her children which served them well in life. Dorothy will be dearly missed. Dorothy is survived by her daughters, Ann Seel (Dave) of Columbia, S.C; Nancy Mazur (Doug) of Hoschton, GA: Lois Myers of Hoschton, GA: and Marie Parmer (Tim) of Hoschton, GA. She is also survived by a brother, James LeBar of E. Stroudsburg, PA, and several grandchildren and great grandchildren. The family held a private Celebration of Life on Sunday, January 23rd. Inurnment will be at the Georgia National Cemetery in Canton, Georgia along with her late husband, Walter "Bud" Myers, reflecting their service during WWII in the United States Army. Date: TBA We would welcome donations in Dorothy's honor to Benton House of Sugar Hill Retirement Home.

The family of Dorothy LeBar Myers created this Life Tributes page to make it easy to share your memories.