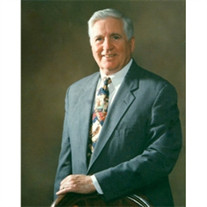 Douglas George Baldwin, 85, Gainesville, GA, formerly of Marietta, GA, died July 30, 2015, at home. He is survived by wife Jeanne Whatley Baldwin and loving stepdaughter Shelley Scott Garrett, both of Gainesville, and several beloved nieces and nephews. Doug and Jeanne married on Valentine's Day 1980. Doug was born in Atlanta to Kelsie James and Nellie Smith Baldwin in March 1930, the sixth of seven children born to the family. He graduated from Brown High in 1947, served two terms in the U.S. Army and later went to GA State University on the G.I. Bill. In 1949 he wed Miss Delores Jean Maggi (1932-1978). Their daughter Lyndia Carol Baldwin Gordon was born in 1950 and died in 1982. Doug worked for Ivan Allen Co. Atlanta 37 years, retiring as one of their top salesmen. As a traveler, one of his most enjoyable adventures was a mule ride down the Grand Canyon. Another favorite was England 1997, with his wife and her late parents Sam D. and Isabelle Johnson Whatley, during which he visited British first cousins. He would also list crossing the US in their trailer, stopping at dude ranches, Niagara Falls and Mexico. His quest for the perfect golf game will no doubt be continued in the next life, including another hole-in-one. All those surrounding Doug were touched simply by knowing him. Who can forget his delight in telling amusing stories and anecdotes? Happiest with Jeanne, their dog Rusty, and friends, sharing a story, or offering sound advice when asked, he valued simple things and took greatest comfort in his family. Doug Baldwin faced his illness with the same courage, determination, and good spirits he exhibited throughout his life. He left a personal legacy of honesty, loyalty and commitment to fulfilling his responsibilities. Doug and his ready smile will be missed and never forgotten. A celebration of Doug's life will be held August 8, 11 a.m., Chapel of Lanier Village Estates, 4000 Village View Dr. Gainesville 30506, Rev. Richard Evans and Rev. Bruce Fields officiating. In accordance with his wishes, the body will be cremated and ashes interred later in Westview Cemetery, Atlanta. Arrangements by Flanigan's Funeral Home, Buford, 770-932-1133. The family is grateful to Hospice and its caring nurses, and hope that any memorial gifts will be sent to Hospice of NEGA Medical Center, 2150 Limestone Pkwy, Ste 222, Gainesville GA 30501.

The family of Douglas George Baldwin created this Life Tributes page to make it easy to share your memories.