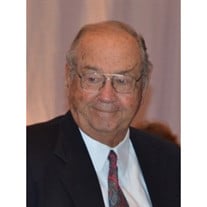 Doug Padgette, a long-time resident of Atlanta and a fixture on Lake Lanier for decades, passed away peacefully in the presence of family on Thursday, October 24th. Doug was born in Saluda, SC to Davenport and Gladys Padgette on June 29, 1934, and was raised on a post-depression cotton farm where hard work, family and education were the priorities. Doug was a star athlete in basketball, football and baseball at Saluda High School, and he proceeded to Clemson University, where he was Air Force ROTC and graduated in Mechanical and Textile Engineering in 1955. He married Barbara Rogers, the love of his life, in 1955 and proceeded to Air Force pilot training, where he flew bombers out of Oklahoma, Texas and Florida during his enlistment. He joined Western Electric in 1958 in Burlington, NC, where he worked on guidance systems for ballistic missiles and studied post-graduate electrical and mechanical engineering at North Carolina State University. During this time, Doug and Barbara's sons Steve and Mark were born. Doug and family transferred to Princeton, NJ in 1963, and he then worked also in Newark and New York City and earned a Masters degree in Industrial Engineering at Lehigh University. Doug and family moved to Orlando, FL in 1968, where he continued his engineering career at General Dynamics and Hetra Corporation, while pursuing his entrepreneurial spirit by co-owning the Dixie Fiberglass boat company. Doug rejoined Western Electric in 1971 when he moved to Dunwoody to start-up the giant Western Electric cable factory on Jimmy Carter Boulevard. Doug's greatest source of pride in his work career was starting up the first industrial-scale fiber optics manufacturing facility inside the cable plant, where the work of he and his team paved the way for the digital connectivity that drives so much of our lives today. Doug was a fixture at Berkeley Hills Golf Club for decades, and his enjoyment of golf and gin rummy, and his competitive spirit, were shared by a close-knit group of friends, many from the faculty and staff of Georgia Tech. Doug was particularly proud of "shooting his age" in golf 12 times. Doug and Barbara discovered Lake Lanier almost immediately upon their arrival in Atlanta, and were part of the "Millionaire's Row" of houseboaters on the lake in the 1980's and 1990's. The memories of the lake and their close friendships have always been a source of immense pleasure for Doug and Barbara. They moved to Lake Lanier in 1994 after Doug's retirement, traded in their houseboat for a pontoon boat, and continued the lake lifestyle. Both loved nothing more than cruising the lake together and with family and friends. Doug is survived by his wife Barbara of Flowery Branch, GA, his sister, Bela Herlong of Saluda, SC, his son Steve and wife Dominique, of Steamboat Springs, CO, his son Mark and wife Michelle of Dacula, GA, and grandchildren Chris Padgette of Los Angeles, CA, Lauren Deavenport of Sneads Ferry, NC, Eric Padgette of Denver, CO, Hannah Padgette of Boulder, CO, Alec Padgette of Atlanta, GA, Erika Padgette of Dacula, GA, and great-granddaughter Hadley Deavenport of Sneads Ferry, NC. Doug's love for Barbara and his family will live on forever. Funeral services will be held on Sunday, October 27, 2019 at 4:30 p.m. in the Chapel of Flanigan Funeral Home. A graveside service and interment will be on Tuesday, October 29 at 2:00 p.m. at Emory United Methodist Church in Saluda, SC.

Doug Padgette, a long-time resident of Atlanta and a fixture on Lake Lanier for decades, passed away peacefully in the presence of family on Thursday, October 24th. Doug was born in Saluda, SC to Davenport and Gladys Padgette on June 29, 1934,... View Obituary & Service Information

The family of Douglas Donald Padgette created this Life Tributes page to make it easy to share your memories.

Doug Padgette, a long-time resident of Atlanta and a fixture...