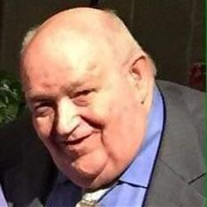 Rev. Eddie Eugene “Ed” Martin, age 73, of Tucker, GA passed away on Friday, November 13, 2020. He was preceded in death by his parents, Lawrence and Billie Jean Martin; and father-in-law, J. T. Buice; grandson, Garrett Gower. Rev, Martin is survived by his wife of thirty years, Janet Buice Martin, Tucker, GA; children, Amy Martin of Virginia, Melissa and Ken Atherton, Mercersburg, PA and Ryan and Jonie Martin, Phillipsburg, PA; step children, Terry Gower, Tucker, GA and Darryl and Dionne Gower, Lynn Haven, FL; sixteen grandchildren; two great grandchildren; dear friends, Jim and Alma Proffitt; mother-in-law, Betty Pugh Buice, Buford, GA; sisters-in-law and brothers-in-law, Gail and Harry Blankenship, Buford, GA, Patti and Michael Waycaster, Buford, GA and Debbie and Greg Reece, Buford, GA; and several nieces, nephews and cousins. Rev. Martin was born July 22, 1947 in Baltimore, MD. He was a graduate of James Buchanan High School in Mercersburg, PA and a graduate of Shippensburg University in Shippensburg, PA with a Bachelor’s Degree and Master’s Degree. He was a retired school teacher having taught at James Buchanan High School and Mercersburg Academy. After his retirement, he became an ordained minister and he was a teacher at the Regional Youth Detention Center in DeKalb County. Rev. Martin was a member of South Ministries and also served as Associate Pastor at Cathedral of Praise at Tucker, GA for ten years. He was a Licensed Minister of Life Point Ministries International Pentecostal Holiness Church. Rev. Martin was a Mason at Tucker Masonic Lodge No. 42 F. & A.M. He was a Shriner and member of the Yaarab Temple and was on staff as Director at Yaarab Temple. Funeral service will be held on Friday, November 20, 2020 at 1:00 p.m. in the Chapel of Flanigan Funeral Home with Evangelist Richard South and Bishop Tim Lamb officiating. The family will receive friends at the funeral home on Friday, November 20th from 12:00 noon until time of service at 1:00 p.m. In lieu of flowers, memorial donations may be made to the American Cancer Society in memory of Rev. Eddie “Ed” Martin. The service will be live streamed. For the safety of everyone, mask should be worn for those attending the visitation and funeral service.

The family of Rev. Ed E. Martin created this Life Tributes page to make it easy to share your memories.