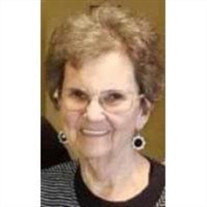 Elinor Sears Wilson, age 81, of Buford, Georgia passed away Wednesday, May 13, 2020. She was preceded in death by her husband of 57 years, James Daniel (Herbie) Wilson; parents, William Earl and Alma Roberts Sears; sister and brother-in-law, Sue Southerland and Verlon C. Southerland, brother, William E. (Bud) Sears III; nephews, Jeremy Davis, William E. (Wes) Sears IV, Chip and Barry Southerland; parents-in-law, Lewis Alton and Runelle Wilson, brother-in-law, Stanley Wilson, sister-in-law Joyce Bagley Wilson. She is survived by daughters and son-in-law, Julie Wilson McBryant and Mike McBryant, Jill Wilson Anderson; grandchildren, Katie and John Gulisano, Danielle and John Mays, Ben and Kayla McBryant, Megan and Will Bowers, and Andilee Anderson; great-grandsons, Johnny Gulisano, Wilson Bowers, and John Walt Mays; sister and brother-in-law, Lynne and Tommy Davis, sister-in-law, Beverly Miller Sears, brothers and sisters-in-law, Richard Wilson, Harry and Sandra Wilson, and Ruth Wilson, and many nieces, nephew, and cousins. Elinor was born in Buford, Georgia on June 17, 1938, and graduated from Buford High School in 1956. Elinor married James (Herbie) Wilson on June 9, 1957 and started her career as an educator at Buford City Schools, where she worked with and taught children grades first through twelfth and became an administrator at Buford Middle School before she retired. She earned her Bachelors and Masters of Education from the University of Georgia where she graduated with honors. Elinor was involved in many ministries at Buford First Baptist Church throughout her life. She was also involved in the Buford Woman’s Club, the Frontier Forest Garden Club, and the Frontier Forest Bridge Club. After retirement, Elinor and Herbie enjoyed traveling and were members of the Georgia Mountaineers and Holiday Ramblers. She traveled across the continental United States, Hawaii, Alaska, and enjoyed countless cruises and many European countries. Elinor enjoyed game time with friends, reading novels, family time and listening to music, especially country. Elinor is now at peace and has joined the love of her life, Herbie, and many life-long friends. In lieu of flowers, donations may be made in her name to Buford First Baptist Silvertone Choir. Because of the current pandemic, a private family celebration will be held at her home at a time not yet determined. Her family appreciates all the love and prayers being offered.

The family of Elinor WIlson created this Life Tributes page to make it easy to share your memories.