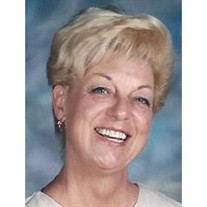 Elizabeth (Libby) Anne Roy, age 69 of Suwanee, GA passed away March 16th, 2014. She is survived by her three daughters; Heather Anne Luzier (Patrick Luzier), Allison Christine Dingman (Dr. Todd Dingman) and Amanda Pritchard. Her four grandchildren; Stewart Luzier, Rachael Dingman, Joshua Dingman, and Hannah Dingman. Her sister; Kathileen Lund (Timothy Lund) and many beloved nieces, great nephews and cousins. Miss Roy was preceded in death by her Father, Lt. Col H.C. Roy and her Mother Alice Ann Clow Roy. She was born in Harrisburg, IL on June 3, 1944. She traveled the world as an army brat and lived in Austria, Germany, and Taiwan. She also lived in Illinois, Georgia, Colorado, Arizona and several areas of California. Libby attended Monterrey HS, Barstow HS and graduated from Norris City Omaha Enfield High School. She attended both the University of Southern Illinois and the University of Arizona. Libby resided in Southern California from 1965 to 2005 where she raised her three daughters in Rancho Cucamonga. She was exuberantly proud of her daughters' accomplishments through their school age years and beyond. Libby enjoyed being an active officer and fundraiser of the sports booster club at their High Schools. She was a wonderful mother who loved her daughters abundantly. Libby enjoyed her career in interior design. This was a natural fit with her love of sketching botanicals and gardening. An accomplished artist, she enjoyed all mediums of painting, sketching, embroidery, knitting as well as good prose. She also was employed by Chaffey Federal School District (Etiwanda High School) from which she retired in 2003. Her friendly, gracious, joyful spirit drew people to her. Everyone enjoyed her intelligent humor and wit. Her laugh was often contagious and heard from far about. Her expansive, expressive vocabulary always kept her story listeners captive. She was loved and will be missed. The family will receive friends beginning at 1PM and the funeral service will be held at 2PM on Saturday March 22nd at Flanigan Funeral Home & Crematory, 4400 South Lee Street, Buford, GA 30518. The family will receive guests after the service at the home of Mr. and Mrs. Luzier, 4595 Colony Point, Suwanee, GA. Her interment will take place in June at Odd Fellows Cemetery in Norris City, IL. The family is requesting donations be made to: Mercy's Point c/o Heather Luzier 4595 Colony Point, Suwanee, GA 30024.

The family of Elizabeth Anne Roy created this Life Tributes page to make it easy to share your memories.