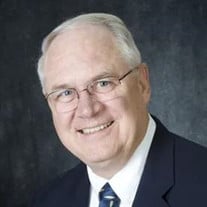 On Thursday, January 21 2021, Francis (Frank) Charles Murphy, loving husband and father of two children, passed away at the age of 78 surrounded by his family. Frank was preceded in death by his father, Raymond Murphy, his mother, Loretta (Gray) Murphy, and brother Patrick Murphy. He is survived by his loving wife of 49 years, Janet (Labozetta) Murphy, daughter Kim Jones and her husband Bobby Jones, daughter Deana Mahan and her husband Shawn Mahan, and granddaughter Elizabeth Jones. He is also survived by his siblings Kathryn Wherle, Mary Possehl , Karen Frimml, Bob Murphy, Colleen Shaull, Ann Krakow, Betty Maas, and Tom Murphy, and numerous nieces and nephews. Frank graduated High School and went on to receive a mathematics degree from the University of Northern Iowa and an MBA from the University of Iowa. Hearing a call to service, he joined the peace corps after college and spent two years teaching in the Philippines. Upon returning to the states he went to work at IBM and quickly rose through the ranks. He retired from IBM after 25 years and then proceeded to work for CSC for 10 additional years. Not one to stay idle in retirement, he served as the district secretary for Kiwanis (2008-2015) and the mayor of Williamsburg (2008-2016). Frank lived in California, Utah, and Texas, before returning to Iowa for retirement to live closer to his family. He enjoyed traveling the world with his wife and daughters eventually setting foot on six continents. From yearly trips to visit family in Iowa, California and Atlanta to seeing giraffes in Africa (and everything in between like a long, long hike along the Apian Way and numerous visits to Presidential Libraries) he gave his family wonderful and vivid memories (and a few cannoli's too) of all the places they visited. Frank also loved photography and could always be found behind a camera at weddings. He enjoyed volunteering at Kiwanis and capturing stories of peoples lives which also resonated through his love of family stories about his aunts and uncles growing up. The family is not planning an immediate service due to COVID, but is planning to hold a celebration of his life later this year when it is safer to gather. In remembrance of Frank's life, the family asks that in lieu of flowers a charitable donation be made to the Kiwanis Nebraska-Iowa District or Kiwanis Children's Fund. Mailed donations can be sent to: Nebraska-Iowa Kiwanis District Foundation 13258 S. 38th St. Bellevue, NE 68123 Online Donations to Kiwanis Children's Fund: (https://www2.kiwanis.org/childrensfund/online-donation-form)

On Thursday, January 21 2021, Francis (Frank) Charles Murphy, loving husband and father of two children, passed away at the age of 78 surrounded by his family. Frank was preceded in death by his father, Raymond Murphy, his mother, Loretta (Gray)... View Obituary & Service Information

The family of Francis Charles Murphy created this Life Tributes page to make it easy to share your memories.