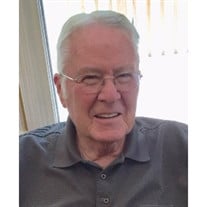 George R. Moore, Jr., passed away on May 10th, 2018, in Buford, Georgia. Visitation will be held at Flanigan's Funeral Home on May 11th, 4 PM until 8 PM.. The funeral will be held on May 12th at 2:30 PM at the chapel at Flanigan's Funeral Home, officiated by Reverend Jim Buckman, pastor of Buford First United Methodist Church. Burial will follow at Broadlawn Memorial Gardens. Arrangements are by Flanigan's Funeral Home. George was born to George R. and Velma Moore September 14th, 1937. He attended Norcross High School, married Joan L Lancaster December 4th, 1959, and served his country in the United States Marine Corp reserves. He retired from the IRS at the Chamblee Service Center after working for 30 years. He was a member of Masonic Lodge 292 and Beacons Sunday School class at Buford First United Methodist Church. He is survived by his wife of 58 years, Joan Moore, his son David Moore, daughter Donna Whiting, grandchildren Aidan Moore, O'Bryan Moore, Delaney Moore, Katie Moore, Anna Pugh, Matthew Whiting, and great grandchildren Hayden Pugh and Lilly Pugh. He is preceded in death and met in the loving arms of our Lord by his father George R. Moore, mother Velma Moore and sister Doris Gambrell. George lived his adult life in his beloved Buford. He cheered for his wolves on the football field before, during, and after his son played for them. As Buford grew and changed around him, George's devotion to the town was steadfast and deep, as was his love for his many good friends with whom he enjoyed so many years. He instilled in his children a strong work ethic and a deep love for life. He laughed, he loved, he lived, and his life was too rich and too full to fit in this small space. In lieu of flowers, donations may be made to Buford First United Methodist Church, P.O. Box 329, Buford, GA 30515.

The family of George R. Moore, Jr created this Life Tributes page to make it easy to share your memories.