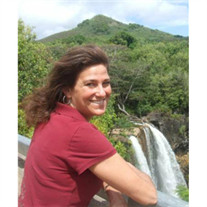 Gigi Strayer Bacigalupo, age 50, of Buford, GA passed away on Friday, January 23, 2015. She is survived by her children, Debra and Matthew Lauzon, Austin, TX, and Sandra Kloosterman, Atlanta, GA; sisters, Carol Graham, Battle Creek, MI, and Susan Strayer-Jennette and husband Kevin, Galesburg, MI; and several nieces and nephews. Gigi was born August 26, 1964 in Kalamazoo, MI. She was a 1982 graduate of Comstock High School and she attended Grand Rapids Culinary College. She was owner of Lake Lanier Power Sports in Buford and was former caterer, chef and owner of Chefs on the Run, Inc. She was of the Presbyterian faith. A memorial service will be held Wednesday, January 28, 2015 at 4:00 p.m. in the Chapel of Flanigan Funeral Home. The family will receive visitors at the funeral home on Wednesday from 2:00 p.m. until the time of service. In lieu of flowers, donations may be made to the Muscular Dystrophy Association, www.mda.org, in memory of Gigi Strayer Bacigalupo.

The family of Gigi Strayer Bacigalupo created this Life Tributes page to make it easy to share your memories.

Gigi Strayer Bacigalupo, age 50, of Buford, GA passed away on...