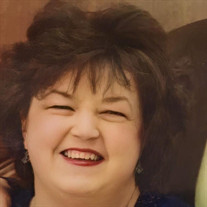 Glenda Martin Harrison, age 60, passed away unexpectedly on September 5, 2021. Glenda was born in Hall County, Georgia on October 27, 1960. She was preceded in death by her parents, Fred and Sarah Martin; her sister, Martha Light; her parents-in-law, Luke and Mozelle Harrison; her nephew, Danny Sexton; and her brother-in-law, Ray Sexton. Glenda is survived by her husband of 35 years, James (Tony) Harrison, her daughter, Mary Frances Everett and Ricky Crawford; her treasured granddaughter, Raylee Rose Everett; sisters, Edith and Buster Puckett, Vivian and James Youngblood; her brother, David and Joy Martin; Deborah Martin; sister-in-law, Charlotte Harrison Sexton; 11 nieces and nephews; and numerous very special friends and family members. Glenda was a graduate of Johnson High School in Hall County; took computer courses at Gainesville College; North Georgia Tech; and completed coursework through the Professional Secretaries International. She worked in business until she became a front office secretary at Buford High School from 1988-1998. She then worked as a front office secretary at Rock Springs Elementary School in Gwinnett County until her retirement in 2016. A great love for Glenda was church! She sang beautifully, with her entire family; worked in the nursery; was a Sunday School teacher; and was in charge of the Food Pantry at First Baptist Buford for 20+ years. As her health declined, she found purpose in sending cards to people whose name had come to her heart, most especially the Senior Adults. As the poignant song says, “…because I knew you, I have been changed for good!” Rest well in the arms of Jesus, sweet Glenda. Your faith has now become sight, and as Psalm 91:4 states, “He will cover you with his feathers, and under His wings you will find refuge…” Funeral services will be held on Wednesday, September 8, 2021 at 11:30 a.m. at First Baptist Church of Buford with Pastor Wayne Johnson and Pastor Stephen Fountain officiating. Interment will follow at Broadlawn Memorial Gardens in Buford, GA. The family will receive friends at the funeral home on Tuesday, September 7, 2021 from 2:00 p.m. until 4:00 p.m. and from 6:00 p.m. until 8:00 p.m. Flowers accepted or memorial donations may be made to Eagle Ranch, P.O. Box 7200, Chestnut Mountain, GA 30502 in memory of Glenda Harrison.

Glenda Martin Harrison, age 60, passed away unexpectedly on September 5, 2021. Glenda was born in Hall County, Georgia on October 27, 1960. She was preceded in death by her parents, Fred and Sarah Martin; her sister, Martha Light; her parents-in-law,... View Obituary & Service Information

The family of Glenda Martin Harrison created this Life Tributes page to make it easy to share your memories.