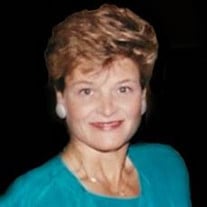 Glenda McKennett Joiner, 73, of Hoschton, Georgia, passed away on December 24, 2020 in Lawrenceville, Georgia due to complications of chronic cardiac and respiratory illness. Visitation will be at 12:00, Saturday, January 16, 2020 at Flanigan’s Funeral Home, 4400 South Lee St, Buford, Georgia. Celebration of Life Service will be held at 1:00 immediately following visitation in the Chapel at Flanigan’s. Rev. Tony Crapolicchio of Trinity Center for Spiritual Living officiating. Glenda was born in Biloxi, Mississippi to Harold and Harriett Byrd on April 10, 1947. She graduated Biloxi High School in 1965. Right after high school, she graduated from cosmetology school and spent her young adult years as a hairdresser in Biloxi, Mississippi and later Columbia, South Carolina. In her words, she was a graduate of and bona-fide alumni of The University of Life. She later moved to and remained in the metro Atlanta area. Her gift of gab and charismatic personality successfully took her into sales and marketing. Initially in the hotel industry and later in the interstate trucking industry. In her more than twenty year career in the trucking industry, She became one of the first leading sales women in that industry. Besides being a master in her sales and marketing, she was a magician in the kitchen. Most would say her cooking rivaled the greats and those who sampled her kitchen creations came back for more. She had many Glenda-isms that always brought a quick smile or giggle. One of which was, “…and Amen for the cook!”, at the end of giving thanks before family meals. She was a dedicated mother and loving wife who worked diligently to create the perfect hearth and home. She married her current husband Tom Joiner on September 2, 1988 and together they created wonderful memories while residing in Gwinnett County, Georgia. Glenda is preceded in death by her mother and father, Harold G, and Harriett Byrd, and son Brock C. Wofford, III. Glenda is survived by husband Tom Joiner, step-son Jason Joiner, his wife Stephanie and their children, daughter Celeste Biggs, grandson Justin Hendrix, sister Charlotte Smith, brother-in-law Charles Smith. Please, in lieu of flowers, the family asks that donations be made to: MARR, Inc., Traditions Recovery Center for Women. https://www.classy.org/give/273739/#!/donation/checkout and insert “Glenda Joiner” in the box indicated - no recipient name or email needed. Checks can also be made out and sent to: MARR Addiction Treatment Centers, 2815 Clearview Place, Atlanta, GA 30340 indicating in Memory of Glenda Joiner with the check. The family also wishes to extend our sincere thanks to Dr. Craig Heigerick, Dr. Lance Friedland and Dr. Michael Sineway, and the nurses and staff that so lovingly cared for Glenda in her last days and hours as she transitioned.

Glenda McKennett Joiner, 73, of Hoschton, Georgia, passed away on December 24, 2020 in Lawrenceville, Georgia due to complications of chronic cardiac and respiratory illness. Visitation will be at 12:00, Saturday, January 16, 2020 at Flanigan&#8217;s... View Obituary & Service Information

The family of Glenda Byrd McKennett Joiner created this Life Tributes page to make it easy to share your memories.