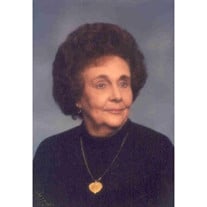 Grace Burel Puckett, age 88, of the Duncan Creek Community in Buford, GA passed away Thursday, July 16, 2015. She was born February 5, 1927 to Calvin and Mary Jane Pruitt Burel. She was preceded in death by her parents, her husband (Ernest F. Puckett), brothers John Burel and William (Billy) Burel. She was valedictorian and president of the class of 1944 of Dacula High School. She received a Bachelor of Science Degree in Home Economics Education from Georgia State College for Women in 1947. She taught High School at Dacula High School for 5 years. She was blessed with two sons and stayed home with them until they started school. She taught private piano lessons to a number of pupils during the time she was home. She returned to the University of Georgia and received certification in Elementary Education and taught third grade at Dacula from 1959 until retirement in 1984. She received a Masters and Specialist six year degree from the University of Georgia and Certification in Supervision for Student Teachers of which she had several student teachers. She was a member of Duncan Creek Congregational Church where she served as pianist for over seventy years, Church Historian, Sunday School Teacher, and making of three church directories and one cookbook. She was a member and past President of Beta Rho chapter of Delta Kappa Gamma, member of Delta Kappa Pi, Life Member of Gwinnett and State Retired Educators Associations, NEA, GAE, Gwinnett Historian Society, Gold Star Wives of America, Life Member of USA Alumna, and honorary life membership in PTA. She has served as President of the Dacula Rainbow Club and the Parks and Recreation Senior Council. She was elected to the Gwinnett Educators Hall of Fame, chosen Star Teacher by a former student, and received dedication of the school year book by Senior Class of 1971. She worked on numerous school courses and projects throughout her career. She is survived by her sons and daughters-in-law, Timothy E. and Janice A. Puckett, Kent B. and Robin W. Puckett of Buford. She is survived by three grandchildren, Brian Puckett and (Jennifer) of Canton, Korey Puckett and (Dawn) of Buford, and Jana Puckett Hensey and (Chris) of Braselton. She is survived by five great grandchildren, Landon Puckett, Carlynn Puckett, Brinlee Puckett, Walker Puckett, Caitlyn Hensey, and several nieces, nephews, cousins, and friends at Duncan Creek Church. Funeral service will be held Sunday, July 19, 2015 at 3:00 p.m. at Duncan Creek Congregational Church with Rev. James D. Dillin officiating. Interment will follow at Duncan Creek Church Cemetery in Buford, GA. The family will receive friends at the funeral home on Saturday, July 18, 2015 from 2:00 p.m. until 9:00 p.m., as well as on Sunday from 10:00 a.m. until 2:30 p.m. Flowers are accepted or in lieu of flowers, you can make a donation in memory of Grace Puckett to Duncan Creek Church, Dacula High School Valedictorian Scholarship Fund, Beta Rho Scholarship Fund, or Gwinnett Retired Teachers Scholarship Fund.

Grace Burel Puckett, age 88, of the Duncan Creek Community in Buford, GA passed away Thursday, July 16, 2015. She was born February 5, 1927 to Calvin and Mary Jane Pruitt Burel. She was preceded in death by her parents, her husband (Ernest F.... View Obituary & Service Information

The family of Grace Burel Puckett created this Life Tributes page to make it easy to share your memories.

Grace Burel Puckett, age 88, of the Duncan Creek Community in...