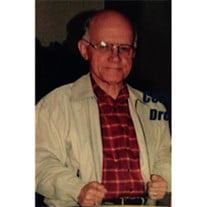 Grady F. Stancel, age 87, of Buford, GA passed away on Monday, May 9, 2016. He was preceded in death by his wife of fifty-seven years, Gaynell Humphrey Stancel, parents, Vasco and Ora Stancel. He is survived by his daughters and son-in-law, Carol Stancel Green and husband, Guy Green, Buford, GA and Joan Stancel Walls, Winder, GA; grandson, Matthew and Macey Green, Athens, GA; great-grandson, J.W. Green; aunt, Lucy Banks Stancil, Dacula, GA; several nieces, nephews and cousins. Mr. Stancel was born December 18, 1928 in Buford, GA. A veteran of the Marine Corp and member of THE CHOSIN FEW, he served in the Korean War. He was a graduate of Sugar Hill School, Sugar Hill, GA. He was retired from General Motors Assembly Plant after thirty years of service in Doraville, GA and a member of the U.A.W. Local10. He was a longtime member of Sugar Hill United Methodist Church, Sugar Hill, GA, a member of Early Bird Sunday school class, and a member of the Keenagers at Sugar Hill UMC. He went on mission trips with the youth at church. He formed Military Ministry at Sugar Hill UMC and helped out at the Healing Room on Monday nights with Healing Ministry. He taught Bible Study at Brookdale Assisted Living on Thursdays and was an avid sports fan, loved fishing and was a knife collector. "He was greatly loved by his family and will be greatly missed by his daughters, grandson and friends". Funeral services will be held on Wednesday, May 11, 2016 at 4:00 p.m. in the Chapel of Flanigan Funeral Home with Rev. Mari Lane Brooks and Pastor Jeff Coleman officiating. Interment will be at Broadlawn Memorial Gardens, Buford, GA with military honors. The family will receive friends at the funeral home on Tuesday, May 10, 2016 from 5:00 p.m. until 8:30 p.m. and on Wednesday, May 11, 2016 from 2:00 p.m. until the time of service. Grady F. Stancel was a member of " THE CHOSIN FEW". Grady was in the Marines back in 1950 when the North Koreans invaded South Korea. He landed at Inchon with United Nations forces commanded by General Douglas MacArthur, and with fellow Marines, fought his way inland to the Chosin Reservoir. Meanwhile, the Chinese Communists had secretly infiltrated an army of 130,000 troops into the mountains surrounding the reservoir. Their orders were to attack and destroy the 30,000 United Nations forces there, composed mostly of US Army and Marine units. Threatened with annihilation, the Marines fought their way back to the coast for evacuation during 17 days of continuous battles. Not only were they being attacked from every direction by overwhelming numbers of enemy troops, but the Marines also had to cope with brutal winter weather, including temperatures falling to 45 degrees below zero. Marine casualties were staggering, both from combat and from the severe winter weather. Grady was among the survivors - The CHOSIN FEW. An American Hero! To express condolences, please sign our online guest book at www.flaniganfuneralhome.com. Arrangements by: Junior E. Flanigan of Flanigan Funeral Home and Crematory, Buford, GA (770) 932-1133.

Grady F. Stancel, age 87, of Buford, GA passed away on Monday, May 9, 2016. He was preceded in death by his wife of fifty-seven years, Gaynell Humphrey Stancel, parents, Vasco and Ora Stancel. He is survived by his daughters and son-in-law,... View Obituary & Service Information

The family of Grady F. Stancel created this Life Tributes page to make it easy to share your memories.