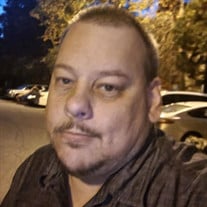 Gregory Christopher Beaman, age 46, of Lawrenceville, Georgia passed away on February 15, 2022, after a very brief and valiant fight with cancer. Greg was preceded in death by his loving mother, Jody Beaman Aikens and father Johnny S. Aikens. As a young child, Greg’s father Timothy Beaman passed away. Greg greatly missed his father, but God sent Johnny to Jody and Johnny embraced the role as a wonderful father to Greg and his younger sister Angela. Greg is survived by his sister and brother-in-law, Angela and Robert Rogers; nephews and nieces, Bradley Crenshaw, Wilson Rogers, Sarah Crenshaw, Tempy Rogers, and Skyler Rogers; aunts Linda Bennett, Cynthia Deemer, Tammy Gibson, Susan Green, and Patricia Lee; uncle Russell Beaman; and numerous cousins and friends who loved him. He is also predeceased by his uncle William “Billy/Bubba” Kirkland. Greg was born April 22, 1975 at Grady Hospital in Atlanta, Georgia. He attended Bethesda Elementary, Sweetwater Middle School, and Berkmar High School in Lilburn near Lawrenceville. Greg was employed for many years as an information technology/computer contractor. Greg was taken away from his family and friends far too young due to cancer. Greg’s loves and passions were his two cats and fish, gaming, having a good card game, and time spent with friends and family. He was a great jokester and all who knew him can remember his laughter. Don’t think of him as gone away, his journey’s just begun. Life holds so many facets, this earth is only one. Just think of him as resting from the sorrows, pain, and tears, in a place of warmth and comfort where there are no days and years. Think how he must be wishing that we could know today, how nothing but our sadness can really pass away. And think of him as living in the hearts of those he touched, for nothing loved is ever lost and he was loved so much. Greg’s family will receive friends on Saturday, February 26 from 4:00 pm to 5:00 pm, with a memorial service following at 5:00 pm at Flanigan Funeral Home, 4400 South Lee Street in Buford, Georgia with Robert S. Rogers officiating. Masks are required for both the visitation and memorial service. In lieu of flowers and in remembrance of Greg, charitable gifts can be made to the following organizations: Alzheimer's Association https://act.alz.org/site/Donation2?df_id=49260&mfc_pref=T&49260.donation=form1&mfc_pref=T&32112.donation=&NONCE_TOKEN=B782AEE831EFD24F3138B3652FED5A3A Emory Winship Cancer Institute https://winshipcancer.emory.edu/support-winship/give/memorial-gifts.html

The family of Gregory Christopher Beaman created this Life Tributes page to make it easy to share your memories.