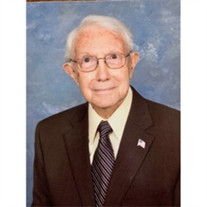 Mr. Handsel Grady Morgan, Sr., age 98, of Buford, GA, passed away on February 29, 2020. He is survived by three children, daughter, Ann Morgan Kaser, of Los Angeles, CA; son, Handsel Morgan, Jr., of Buford, GA; and son and daughter-in-law, Tim and Darcy Morgan, of Buford, GA; by four grandchildren, Lois Morgan Grimsley (Ryan), Taylor Morgan (Jessica), Leah Morgan, and Samuel Morgan (Hannah); and by five great-grandchildren. He was predeceased by his wife of sixty-two years, Joy King Morgan, and his parents, Henry Grady Morgan and Eva Benson Morgan. He was born in Buford, Georgia, on September 20, 1921, and graduated from Buford High School, where he played football, basketball, baseball, track, and other sports. He was a member of Buford First United Methodist Church since 1931, serving in a number of positions, including Church Board, District Trustee, delegate to Annual Conference, Chancel Choir, and perhaps most notably, he taught the Fellowship Sunday School Class for more than 40 years. He earned an AB degree from Piedmont College, a Masters Degree from University of Georgia, where he was Phi Beta Kappa, and earned his law degree while teaching at Buford High School by going to night school at John Marshall Law School, and was admitted to the Georgia Bar in 1950. He served 37 months in the U.S. Army during World War II, being deployed in the Allied invasion of North Africa, Italy, France, and Germany, and is an Honorary Lifetime Member of the American Legion. He served three terms in the Georgia House of Representatives, serving from 1959-1965, one of Gwinnett County's two representatives at the time. Perhaps his most significant accomplishment in the legislature was co-sponsoring legislation to create the Gwinnett Judicial Circuit out of the Piedmont Judicial Circuit, so Gwinnett County had its own court system and was no longer combined with Jackson, Barrow, and Banks Counties. He was the first executive director of the Buford Housing Authority, supervising the original construction of the public housing projects in Buford, Sugar Hill, Duluth, and Flowery Branch. He served as Judge of the City Court of Buford (later the State Court of Gwinnett County) from 1965 to 1970. By 1970, the population of Gwinnet County had increased to 50,000, and the County was thereby entitled to establish its own separate Juvenile Court. Beginning in 1971, he served as Gwinnett County's first Juvenile Court Judge, presiding for 20 plus years and retiring in 1991. He received the Public Service Award in 1994 from the Gwinnett Chamber of Commerce. He was appointed Buford City Historian in 1987 and began collecting information for a history of Buford, Historic Buford, published in 1993, and later republished. He also wrote The Buford First United Methodist Church: a History, published in 1996, followed in 2008 by The Measure You Give, a collection of his Sunday School lessons. He was also instrumental in establishing the Buford City Museum. Funeral services will be held on Wednesday, March 4, 2020, at 11:00 A.M. in the sanctuary of Buford First United Methodist Church, with Rev. Jim Buckman officiating. Interment will follow at Broadlawn Memorial Gardens in Buford, Ga. The family will receive friends at the funeral home on Tuesday from 4:00 P.M. until 8:00 P.M. While the family welcomes flowers, Mr. Morgan requested donations to the Buford First United Methodist Church Building Fund.

The family of Handsel Grady Morgan, Sr. created this Life Tributes page to make it easy to share your memories.