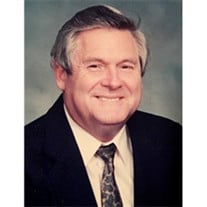 Atkeson Harold Money, age 79, passed away peacefully surrounded by family September 1, 2016. Harold was born in Dothan, Alabama on May 28, 1937. He was the second of three sons of Lon and Gladys Money. Harold was raised in Phenix City, Alabama. After he finished high school he joined the Air force. While serving in California he met his wife Darlene. He and Darlene married on February 15, 1958 and they began a life together. He supported his growing family as an insurance sales representative. Many looked to Harold as a strong leader and trusted in his guidance. Through this trust in leadership Harold played a vital role in the development of the formation of several Lutheran Churches in the Atlanta Metro area, most recently Oak Road Lutheran Church. He also served as a Commander of the American Legion Post 127, Buford, GA. Harold and Darlene, his wife of 58 years, settled in Auburn, GA in 1985 where he served as the City Mayor for four years. He was an active member of Winder Chamber of Commerce, Winder Moose Club, The Lions Club, and other community projects. He was a supporter and contributed to many veteran services and dedicated his life to help others. Harold loved his family and community and was always ready to meet the needs of the people around him. Harold was preceded in death by his parents, Lon and Gladys Money, his siblings, James and Aletha Money, and his infant children, Vickie and Gary Money. He is survived by his wife, Darlene Spitzer Money; his children, Patricia Money, Randall and Barbara Money, Karen and Kirk Jorgensen; five grandchildren; four great grandchildren; his brother, Paul Money, his sisters-in-law, Helen Hirschey and Ruth Spitzer; and several nieces and nephews. We will be celebrating the full life of Harold Money on the September 5, 2016 at 11:00 a.m. in the Chapel of Flanigan Funeral Home, 4400 South Lee Street Buford, GA with Pastor Scott Holder officiating. Interment will follow the service at the Auburn City Cemetery, Auburn, GA. Family will receive visitors on Sunday, September 4, 2016 at Flanigan Funeral Home between the hours of 3:00 p.m. and 7:00 p.m. and prior to the service on Monday, September 5, 2016 between 10:00 a.m. -10:45 a.m. In lieu of flowers please make donations to Oak Road Lutheran Church or St. Jude's Children's Hospital in memoriam of Harold Money. The family would like to thank all that provided care for Harold during his greatest need and all the comfort that was provided by friends and loved ones. To express condolences, please sign our online guest book at www.flaniganfuneralhome.com. Arrangements by: Junior E. Flanigan of Flanigan Funeral Home and Crematory, Buford, GA (770) 932-1133.

Atkeson Harold Money, age 79, passed away peacefully surrounded by family September 1, 2016. Harold was born in Dothan, Alabama on May 28, 1937. He was the second of three sons of Lon and Gladys Money. Harold was raised in Phenix City,... View Obituary & Service Information

The family of Harold A. Money created this Life Tributes page to make it easy to share your memories.