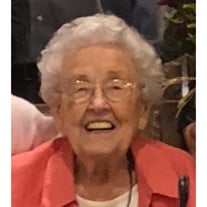 Henrietta Perkins, age 95 of Buford, GA, passed away Friday, January 18, 2019. She was preceded in death by her husband, Robert Augustus Perkins, her parents, James Arthur Moseley and Bertha Hogan Moseley, brothers Nixon and Preston Moseley, sisters Mary Alice Pulliam and Sally M. Stowe, and her daughter-in-law, Judy Porter Perkins. She is survived by sons and daughters-in-law: Robert and Paula Wilborn Perkins, Jimmy and Joan Perkins, and Phillip and Lee Perkins; grandchildren: Daren and Lynn Perkins, Tiffany and Kenny Hutchinson, Derek and Amy Perkins, Emily and Steven Beaumont, Drew and Heather Perkins, Andy and Dana Perkins, and Kathleen and Jonathan Welch; step grandchildren and wives: Rymon and Julie Wilborn, Eric and Shannon Wilborn, and Sean and Robyn Wilborn; great-grandchildren: Tyler, Dalton, and Abbi Perkins, Callie and Jessie Perkins, Madison and Avery Hutchinson, Claire and Molly Beaumont, Emma Kate and Sawyer Perkins, and Jonah and Kayla Mynatt; special niece Ann Sullivan, and numerous other step-grandchildren, nieces and nephews. Henrietta was born in Clermont, Georgia and graduated as salutatorian from Estanollee High School in 1940, where she met the love of her life who became her husband of 73 years. She was a resident of Buford since 1947. Evidence of her dedication of service and work ethic was seen in her 24 years of service for Buford City and 15 years of service as a secretary at First Baptist Church of Buford. Faith, family and community were the guideposts of Henrietta's life. For over 70 years, she was a member of First Baptist Church of Buford. During that time she served faithfully as Director of the following departments: Nursery, Primary Children, Junior, Intermediate, Young People, Adult, and Training Union. She was also a member of WMU, Abundant Life Fellowship, and the Silvertones choir. Henrietta served her community as President of Buford Junior Woman's Club, was involved in civic affairs of Buford City Schools and as a devoted fan, supported and attended Buford and North Gwinnett football, basketball, baseball, and softball games as well as dance programs of her children, grandchildren, and great-grandchildren. Through her work in church and community, Henrietta touched many lives. Her spirit of hard work, loyalty, and service to others were evidenced everyday in interactions with those she met and loved. Even as a resident of Brookdale Senior Living, she made a difference in workers and fellow residents. She has left a legacy of love, joy, and peace to her family. Every day, she felt the blessing of being a wife, mother and friend to all she has known, and she would like to be remembered as faithful to God, Jesus Christ and the Holy Gospel. Funeral services will be held on Monday, January 21, 2019 at 2:00 p.m. in the Chapel of Flanigan Funeral Home with Pastor Wayne Johnson and Pastor Stephen Fountain officiating. Interment will follow at Broadlawn Memorial Gardens in Buford, GA. The family will receive friends at the funeral home on Sunday, January 20, 2019 from 2:00 p.m. until 8:00 p.m. Flowers accepted. The family requests donations be made to First Baptist Church missions fund, 4550 Hamilton Mill Rd., Buford, GA.

The family of Henrietta Perkins created this Life Tributes page to make it easy to share your memories.