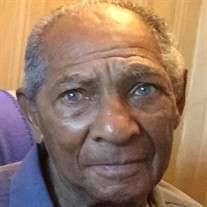 Herman Eason was born May 29, 1923 to Ulysses and Nancy Allen Eason in Senatobia, MS who preceded him in death. He was the eldest of 9 children born to this union. He also had 3 older siblings. In the early 1950’s he migrated to Chicago and met and married Mattie R.B. Irby in 1952 who preceded him in death. Seven children were born into this union. Later in life, he was blessed with three more children. During his early years he worked with a team to transport materials to Chattanooga, TN that was used to create the Atom Bomb during WW2. After his migration, he worked in construction and later joined Waste Management as a site manager where he retired. He accepted Christ at an early age. He was known for his story telling as his memory was unmatched by many. He remained active in his later years and at the age of 87, he was still shoveling snow. He was greatly loved and will be missed by his family and friends. He leaves to cherish his memory; daughters Anita Eason; Wordie Adams; Cynthia Eason-Williams; Eureka (Melvin) Saunders and Latear (Simeon) Eason; sons Herman (Janet) Eason; Jerome Eason and Lavandis Ellis; sisters Wordie Dixon; Christine Toney; Bernice Adams and Mary (Floyd) Stanley; brother Leon Eason; aunt Catherine McIntyre; sister-in-law Henrietta Rollins; sons-in-law, Carl Reid, Bradley Proctor; 14 grandchildren; 40 great grandchildren; 12 great-great grandchildren; and a host of other relatives and friends. He was also preceded in death by: daughters Jacyna Eason-Reid and Earlene Eason; granddaughter Latrea Eason Prophet; grandsons Christopher Eason Proctor and Justin Proctor; great grandson Denardo Williams Jr; sisters Geraldine Love, Hetter Ray Stigall and Florida Reed; brothers Ulysses Eason; Eugene Williams and Major Eason; sons-in-law, George Williams, Anthony Adams. A memorial service will be held on Saturday, August 29, 2020 at 4:00 p.m. in the Chapel of Flanigan Funeral Home with Minister Kevin Smith officiating. The family will receive friends on Saturday from 3:00 p.m. until the time of service at 4:00 p.m. To express condolences, please sign our online guest book at www.flaniganfuneralhome.com. Arrangements By: Junior E. Flanigan of Flanigan Funeral Home and Crematory, Buford, GA (770) 932-1133.

Herman Eason was born May 29, 1923 to Ulysses and Nancy Allen Eason in Senatobia, MS who preceded him in death. He was the eldest of 9 children born to this union. He also had 3 older siblings. In the early 1950&#8217;s he migrated to Chicago... View Obituary & Service Information

The family of Herman Eason created this Life Tributes page to make it easy to share your memories.