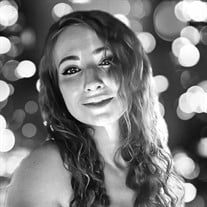 It is with profound grief and heartbreaking sadness that we announce that Holly Nicole McPhail, aged 35, passed away in Buford, GA on January 7, 2021. Holly was born on Wednesday, December 25, 1985 at 3:00 pm – a true Christmas blessing to her parents. Holly loved the beach, moons & stars, cats, and reading affirmations of many authors, which she used in her own daily life. She also loved working at Costco, as well as many, many other interests. She had a very sophisticated as well as eclectic taste, and her immaculate and stylish home reflected this. Upon entering others homes, Holly always wanted to redecorate their house! She was a gifted and talented artist, and she scored off the charts on aptitude tests in non-verbal communication, which she channeled into her art. Holly’s red hair reflected her true fiery personality, and she was loved by so many, including her many coworkers at Costco in Buford, GA, where she worked her way from the Bakery to the Optical Department as an Assistant. She struggled with depression and anxiety – often times overwhelming – but found comfort in talking it through with her Mom and close friends. But she also had a wicked sense of humor, mostly laughing at herself with others, and she was a fighter – not only in her own life, but for others as well. She graduated with high honors with an Associate of Science Degree in Criminal Justice from ITT, and was Valedictorian of her class when she graduated with a Bachelor of Science Degree in Criminal Justice. This enabled her to work in surveillance and security at the Casinos in Tunica, MS, which she enjoyed. Holly became a mother at the age of 17. She knew the value of the dollar, and worked hard to raise her daughter all on her own. She worked and saved, worked and saved, and always had the most generous heart, helping others in need, all the while offering a sympathetic ear and opening her home to family and friends, no matter the reason. Holly is survived by her loving daughter, Jade Marie Bailey (Thomaston, GA), her Mother, Elizabeth Wolfgram Morgan (Louisville, TN), her sister, Daly Foncree (Tucson, AZ), and her Father, David McPhail (Oxford, MS). She is already greatly missed by her Aunt, Tracy Wolfgram Walker (Bill, Oak Ridge, TN), her uncles, James Wolfgram (Cecilia, Monterey, TN), Dan Wolfgram (Oak Ridge, TN), her Grandparents, Mary H. Sollie (Louisville, TN) and James Sollie (Tupelo, MS), her Uncle and Aunt, Ben and Charlotte McPhail (Oxford, MS), as well as her cousins including Becca Kidwell (Zackary, Oak Ridge, TN), Sarah Walker (Chris Ayers, Clinton, TN) , Haley Wolfgram (Sam, Grand Rapids, MI) Bree Baccki (PJ, MI), and other cousins, JJ Piotrowski, Lee McCullum, and Zack, Joshua and Alexis McPhail (MS). She also loved and was loved by her very special friend, Stephan Slack (Buford, GA), and her special friend, Matt Egan (Brayden, FL). Holly was preceded in death by her Maternal Grandfather, James G. Wolfgram, and her Paternal Grandparents, Brooks and Mary (Gan Gan) McPhail. Holly was a bright, bright light who still had so much more shine within her. She has left an unimaginable hole in the heart of those who loved her. A celebration of Holly's life will be held in early summer. In lieu of flowers, a donation can be made for Jade's future. Here is also the link to a Go Fund Me that one of Holly's friends has started: https://www.gofundme.com/f/a-wallet-for-hollys-gemstone-jade?sharetype=teams&member=8016754&utm_medium=social&utm_source=facebook&utm_campaign=p_na+share-sheet&rcid=cb10af553330483aa00344d9bbf0577e

It is with profound grief and heartbreaking sadness that we announce that Holly Nicole McPhail, aged 35, passed away in Buford, GA on January 7, 2021. Holly was born on Wednesday, December 25, 1985 at 3:00 pm &#8211; a true Christmas blessing... View Obituary & Service Information

The family of Holly Nicole McPhail created this Life Tributes page to make it easy to share your memories.

It is with profound grief and heartbreaking sadness that we announce...