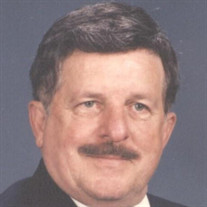 Howard Joseph Lindner of Buford Georgia, age 86, passed away after a long battle with Parkinson’s disease on Monday, December 21, 2020. He is survived by his son and daughter-in-law, Bill and Gigi Lindner, his daughter, Connie Lindner Esford, 3 granddaughters, and 1 great granddaughter. Howard was born January of 1934 in Portsmouth, Ohio, a little town on the Ohio River to Carl F. Lindner and Dora Mae Lindner. His parents were only children who began a great big family. They had 5 children, 26 grandchildren, and 40+ great grandchildren and numerous great great grandchildren. He attended both grade school and high school at St. Mary’s Catholic School. He graduated with a class of 22 in 1951. He served in the United States Navy and Naval Reserves from 1956 to 1959 with an Honorable Discharge. His service time was on the ship U.S.S. Macon CA-132. They traveled all over the seas in service to our country. He was employed for many years as a Comptroller, Bookkeeper, and other various accounting positions. He earned a degree in accounting in the 1970’s and went on to use that degree to teach bookkeeping classes at DeKalb College in Georgia. He enjoyed his family, church, camping, fishing and hunting, playing horseshoes, and cooking for large church gatherings during the summer season. He lived most of his life in and around Atlanta, Georgia and traveled all over the world and United States as part of his work and vacation. He really enjoyed the big family reunions in Ohio in his hometown of Portsmouth, Ohio. There are no plans for a service due to the current situation. At a later date, there will be a small family gathering to memorialize our great Dad, grandfather, great-grandfather, brother, and uncle. He will be laid to rest in Ohio. In lieu of flowers, we request that you make a donation to the Georgia War Veterans Nursing Home in Augusta, Georgia, on behalf of our dad, Howard Lindner, for all the great work they do for our Veterans. To the staff of Georgia War, our family is so thankful to all the time and friendship you showed our father and family members during his time there. “Remember he was respectful…a man of few words…short of stature but mighty in humor…carefree.”

Howard Joseph Lindner of Buford Georgia, age 86, passed away after a long battle with Parkinson&#8217;s disease on Monday, December 21, 2020. He is survived by his son and daughter-in-law, Bill and Gigi Lindner, his daughter, Connie Lindner... View Obituary & Service Information

The family of Howard Joseph Lindner created this Life Tributes page to make it easy to share your memories.