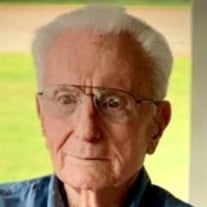 Howell Burton Titshaw of Suwanee, GA passed away on December 11, 2020 at the age of 96. A lifelong resident of Gwinnett County, Howell was born on September 19, 1924 to Delbert and Winnie Henry Titshaw. He attended the Buford schools and received a welding certificate from Habersham College. At the beginning of World War II, he worked in the Mobile, AL shipyards until he was drafted into the U.S. Army in 1943 where he “fought in 5 major battles and a beach head landing before turning 21 years old,” as he liked to tell his grandchildren. He marched across France with General Patton’s army and witnessed the General’s famous “incident” on the Rhine River in March, 1945. He helped liberate Dachau concentration camp, freeing more than 30,000 Jews and political prisoners. After WWII, he served in the Panama Canal Zone. After his military service, he was among the first employees to be hired at the General Motors Assembly Plant in Doraville, where he worked for 31 years. On June 17, 1949, he married the love of his life, the former Wilma Compton. He served his Lord and Savior as a deacon, Sunday School teacher and greeter at Suwanee First Baptist and later at Shadowbrook Baptist Church. He was an avid deer hunter. He could repair “almost” anything. Howell was predeceased by his parents and a brother, Royce Titshaw. In addition to his wife of 71 years, Wilma, he is survived by his children, Wanda and Bill Maddox of Carrollton, John and Janis Titshaw of Cumming and Mark Titshaw and Tracy Cook of Buford; grandchildren Meredith Maddox of Atlanta, David and Sarah Titshaw of Watkinsville, Elizabeth and Kevin Johnson of Bremen, Drew and Brittany Maddox of Carrollton, Jonathan and Ashley Titshaw of Florence, SC, Ben Titshaw of Athens and Addison Cook of Buford; great-grandchildren Luke and Emma Johnson, Sam, Hannah and Eli Titshaw and Brooklyn and Gehrig Maddox; sister Marilyn and Fray Ned Hill of Nicholson and brothers-in-law and sisters-in-law Frank and Brenda Compton and Jimmie and Charles Bell, all of Buford and Bonnie Taylor of Houston, TX; many nieces and nephews. The family would like to acknowledge Brookdale Buford for providing compassionate care to Howell during the last months of his life. A funeral service will be held Monday, December 14, 2020 at 2:00 p.m. in the Chapel of Flanigan Funeral Home with Rev. Bobby Linkous officiating. A graveside service with military honors will follow at Broadlawn Memorial Gardens with Pastor Jerrod Rumley officiating. The family will receive friends on Monday from 1:00 p.m. until 2:00 p.m. prior to the service at the funeral home.

Howell Burton Titshaw of Suwanee, GA passed away on December 11, 2020 at the age of 96. A lifelong resident of Gwinnett County, Howell was born on September 19, 1924 to Delbert and Winnie Henry Titshaw. He attended the Buford schools and... View Obituary & Service Information

The family of Howell Burton Titshaw created this Life Tributes page to make it easy to share your memories.

Howell Burton Titshaw of Suwanee, GA passed away on December...