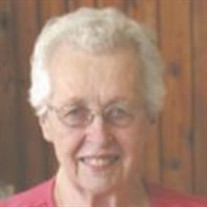 Jackie Joseph, age 89, passed away peacefully in her sleep on Wednesday, January 20th at Tender Personal Care Home #2 in Lawrenceville, Georgia. Daughter of the late Helen and Samuel G. Alderman of Coral Gables, Florida, and sister of the late Samuel G. Alderman, Jr., she was preceded in death in 2005 by her husband of 53 years, Robert (Bob) P. Joseph of Buford, Georgia. Jackie, who attended the University of Georgia and University of Miami, met and married her husband after graduation, becoming a military wife when Bob entered the Army at Fort Campbell, Kentucky in 1952 during the Korean Conflict. After his discharge in 1954, Bob began his career in Radio Broadcasting management in Paducah, Kentucky and Anna, Illinois. As well, Jackie and Bob began their family with the adoption of daughter, Kathy, and later son, Mark. The family moved to Buford, Georgia in 1964 after purchasing the local radio station. Jackie made enormous contributions to the family business as the First Class Engineer (first female Radio Engineer in Georgia--1965) as well as its Business Manager. Jackie and Bob built two additional radio stations and continued in the business for 40 years when they retired after selling their remaining radio station, Oldies Lake 102 FM. In addition, Bob and she were founding members of Prince of Peace Catholic Church, then located in Buford. Jackie, along with Bob's support, was extremely active in the Lake Lanier Association, becoming its President for over 30 years until her 2013 retirement. Her intelligence, leadership, vision, graciousness and patience were always “at the helm” of anything she undertook. Jackie is survived by her daughter, Kathy McCurdy and her husband Bruce Johnson, her son, Mark Joseph and his wife Jackie and her grandchildren, Adam, Peter, Clara, Henry and Julia. Survivors also include her sister-in-law, Betty Alderman, nephew, Sam G. Alderman III, his wife Kari and their children Ella Cole and Sam IV, niece Helen Fitzgerald and her husband Sean, several cousins as well as godson Daniel Duggins. Special thanks to Mary, Daniel and their caregivers KeKe, Sharon and Marjorie as extended family in taking wonderful and loving care of Jackie in the last 15 months. Loving thanks to Daniel Duggins for looking after Jackie (Bob) for decades. Many thanks, also, to Jackie's neighbors and good friends who watched over her these last years. Jackie's private funeral (no visitation) will be Saturday, February 13th, 2021, 12:00 Noon at St. Lawrence Catholic Church in Lawrenceville, Georgia. The funeral will be streamed on the website at: saintlaw.org under the live stream button and will be available for about 2 weeks. Jackie will be interred beside her husband, Bob, in a columbarium at the Georgia National Cemetery (Veteran) in Canton, Georgia at a later date. No plants or flowers, please. If inclined, please consider making a monetary gift to your church, synagogue, humane society, association or favorite charity in Jackie's honor. Please send condolences to Kathy McCurdy and/or Mark Joseph of the Jackie Joseph Family, c/o Flanigan Funeral Home and Crematory, 4400 South Lee Street, Buford, Georgia, 30518. www.flaniganfuneralhome.com. 770-932-1133

Jackie Joseph, age 89, passed away peacefully in her sleep on Wednesday, January 20th at Tender Personal Care Home #2 in Lawrenceville, Georgia. Daughter of the late Helen and Samuel G. Alderman of Coral Gables, Florida, and sister of the late... View Obituary & Service Information

The family of Jackie Joseph created this Life Tributes page to make it easy to share your memories.

Jackie Joseph, age 89, passed away peacefully in her sleep on...