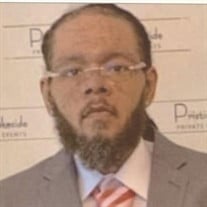 Jamerrick “Pyro” Brown was born on January 24th, 1984 in Duluth, Ga to Stephanie Brown and Charles Terrell. He was a 2003 graduate of Buford High School where he was very active in the Audio-Visual Department. He loved cheering on the Buford High School Basketball team, which he supported avidly. He was employed with the Southeastern Trucking Company in Suwanee, Ga. Jamerrick was always the person to go to for advice, or just a listening ear. He was also known for cracking jokes and making people smile. Jamerrick “Pyro” was an active member or the rap group “The Arsonist”, which is where the name “PYRO” originated from. The proudest accomplishment for him was being the BEST FATHER he could be to his daughter. He was very active in everything that his daughter had going on even up until he couldn’t physically do so. Jamerrick was a great son, uncle, father, cousin, and friend. He was preceded in death by his grandmother Henrietta Brown, an uncle Doug Brown, and a cousin Tidis Brown. He leaves to cherish his memory his mother Stephanie (James) Denson (Stepfather), his father Charles Terrell. He also leaves one daughter Jenajah Brown; One sister Nidia (Thomas) Weems, one brother: Danzel (Talia) Denson, One niece and five nephews; Several uncles: Carl (Tracey) Brown, Otis (Carol) Brown, Gerard (Samaria) Terrell, Chris Terrell; several aunts: Addie Brown, Helena Brown,E Angela Smith, and Sylvia Terrell Walker, and one Great Aunt, Min. Emma Lott. He also leaves to cherish his memory his “Best Friend” and cousin: Theo Brown, his “Arsonist” Brothers; Antonio and Antoine Belt. A Wake will be held on Monday, July 20, 2020 from 7:00 p.m.-8:30 p.m. at Flanigan Funeral Home. Mr. Brown’s Funeral Service will be held Tuesday, July 21, 2020 at 2:00 p.m. in the Chapel of Flanigan Funeral Home with Rev. Eddie Bailey officiating. Interment will immediately following service at Hillcrest Cemetery, Buford, GA 30518.

Jamerrick &#8220;Pyro&#8221; Brown was born on January 24th, 1984 in Duluth, Ga to Stephanie Brown and Charles Terrell. He was a 2003 graduate of Buford High School where he was very active in the Audio-Visual Department. He loved cheering on... View Obituary & Service Information

The family of Jamerrick "Pyro" Brown created this Life Tributes page to make it easy to share your memories.