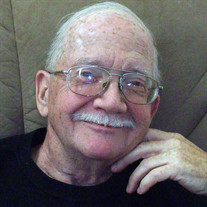 James J. Dorsey July 30, 1939 — Sept. 27, 2020 James J. Dorsey, 81, of Atlanta, GA passed away Sunday, Sept. 27, 2020, after a 3-year battle with chronic lung disease. He was born on July 30, 1939, in Findlay, OH to the late Tom and Betty (Daymon) Dorsey. Jim was a member of the Findlay High School Class of 1957, and a graduate of Findlay College (now the University of Findlay), Class of 1961. He was a former member of College First Church of God, Findlay, OH. Jim had a lifelong interest in photography and cameras, was a great lover of dogs, and enjoyed being a part of his grandchildren’s activities. He began his career with Eastman Kodak in Findlay and later transferred to Atlanta in 1969. Following his retirement, he became a part-time employee of Wings Camera Shop, Atlanta, GA. Jim’s day was not complete until he read the Atlanta Journal-Constitution from front to back, and was known for sharing clippings that resonated with him. On May 9, 1958, he married Kay Henning. Jim is survived by his three children: Thomas E. (Emma) Dorsey of Commerce, GA; Beth Anne Farr of Dacula, GA; and Amy Jo (Kirby) Lavender of Jefferson, GA, and his former wife, Kay (née Henning) Gokey. He is also survived by seven grandchildren: Brianne Farr, Makenzie Greene, Bobbi Hammond, Johnna Rucker, Matt Dorsey, Joshua Dorsey, and Kelly Hight, plus several great-grandchildren and a great-niece. He is survived by his sister Sally (Doug) Guilford of Findlay, OH, and nephews Steve (Melanie) Dorsey of Texas and Scott (Alicia) Dorsey of Louisiana. He was preceded in death by his parents, brother Steve, and son-in-law, Jeff Farr. Visitation will be at Flanigan Funeral Home in Buford, GA Wednesday (9/30) 6:30-7:30 p.m. Memorial service will be held the following Wednesday (10/7) 6-7:30 p.m. at Rabbit Hill Park in Dacula, GA outdoors under the large pavilion, by the dog park and sand volleyball area. Masks are required and social distancing will be practiced. For the memorial, please bring your own chair. At Jim’s request, he will be cremated and his ashes interred at Maple Grove Cemetery, Findlay, OH at a later date. Funeral arrangements are being handled by Flanigan Funeral Home and Crematory, Buford, GA (www.flaniganfuneralhome.com): online condolences may be shared there. Memorial contributions can be made in Jim’s name to Ahimsa House — Georgia’s first and only organization dedicated to helping the human and animal victims of domestic violence reach safety together — at ahimsahouse.org or your local animal shelter.

The family of James Joseph Dorsey created this Life Tributes page to make it easy to share your memories.