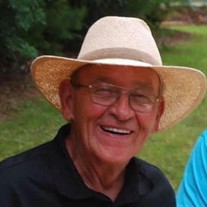 James Howard Hughes, 78, passed away on Thursday, October 14, 2021. He was born November 9, 1942 in Seneca, South Carolina. He was a member of the First United Methodist Church of Norcross. Howard graduated from Seneca High School in 1961. In his time at Seneca High School, he earned 5 varsity letters in football, 4 in basketball, and 3 in track as well as playing on the American Legion Baseball team for four years. He was voted All Skyline Conference for two years, was named to the North-South All Star team, and in his senior year was named State Player of the year and was named an All American in football. He was named to the All-Skyline Conference track team as well. He earned a scholarship to play football at Clemson University and lead the freshman football team in rushing as a running back. He continued to play football at Wofford College and also competed on their track team and baseball team. He graduated from Wofford College in 1965. He started the swim teams at Edgemoor North in Norcross and Nantucket subdivision in Lilburn and coached his daughters and all of their friends. He loved coaching the kids and relished in their accomplishments. He loved to fish, watch Clemson football, and he especially loved to watch anything his grandchildren participated in. He is survived by his loving wife of 56 years, Sandra McClellan Hughes, his daughters Leanne (Todd) Bonsack and Lori (John) Blanchard, grandchildren Mac Bonsack, Mia Bonsack, Mitchell Blanchard, and Kate Blanchard; two brothers, Wallace (MaryAnn) Hughes and Dennis (Beth) Hughes, sister in law Gerry Hughes, and lifelong friend Byron Reames, along with several nieces and nephews that he held dear to his heart. He was preceded in death by his parents, Woodrow and Dessie Barker Hughes and two brothers, Kasler Hughes and Leland Hughes. A visitation to celebrate his life will be held on Friday, October 22nd, 2021 from 4 – 7 pm at 520 White Ridge Trace, Lawrenceville, GA 30043. A graveside memorial will be held on Saturday, October 23rd, 2021 at 1:00 pm at Oconee Memorial Park, 1923 Blue Ridge Blvd, Seneca, South Carolina, 29678

James Howard Hughes, 78, passed away on Thursday, October 14, 2021. He was born November 9, 1942 in Seneca, South Carolina. He was a member of the First United Methodist Church of Norcross. Howard graduated from Seneca High School in 1961.... View Obituary & Service Information

The family of James "Howard" Hughes created this Life Tributes page to make it easy to share your memories.