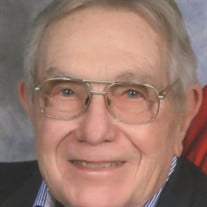 James Robert McKinnon, Sr., age 88, of Buford, GA passed away Saturday, August 7, 2021. He was preceded in death by his parents, Andrew Groover and Sara Maude McKinnon; sister, Anne Sonstroem; brother, Phillip McKinnon; and son, James Robert McKinnon, Jr. He is survived by his wife, Martha McKinnon, Buford, GA; sons, George Andrew (Amanda) McKinnon, Buford, GA, John (Wendy) McKinnon, Acworth, GA; brothers, William Andrew (Ginger) McKinnon, McRae, GA, Henry Mabbet Mathews, Atlanta, GA, James Wallace (Barbara) Mathews, Ashburn, VA; five grandchildren; and five great-grandchildren. Mr. McKinnon was born August 19, 1932 in Pidcock, GA. He fondly spoke of his life as a little boy in South Georgia, growing up among pecan trees, quail, deer, dove and ducks. Although he moved to the city for a successful, 34-year career with Sears, he never lost his love for the country, especially its gospel music, pecan trees, animals, fish and rivers. A faithful and joyful Christian, his love of water began with his baptism and followed the water as a veteran of the U.S. Navy, avid angler, recreational boater, and patron of many, many sprinkler systems for his lawn and Azalea garden. Isaiah 43:2 writes, “When you pass through the waters, I will be with you; and when you pass through the rivers, they will not sweep over you. When you walk through the fire, you will not be burned; the flames will not set you ablaze.” Although capable of fire, he usually chose to light up a room with his broad grin, deep and easy laugh, and heart with limitless love for his beloved wife, three boys, grandchildren, great-grandchildren, as well as anyone with whom he crossed paths. Funeral services will be held Thursday, August 12, 2021 at 6:00 p.m. in the Chapel of Flanigan Funeral Home. The family will receive friends at the funeral home from 4:00 p.m. until 6:00 p.m. Interment will follow at 4 p.m., Friday, August 13, 2021 in Grover-Ramsey Cemetery in Dixie, Ga. William Andrew “Bill” McKinnon will preside. In lieu of flowers, the family suggests memorial donations to Global Servants, 20 Satellite Dr., Winder, GA 30760. Please indicate on the donation for Thailand, this will indicated the donation goes to House of Grace, a mission that Mr. McKinnon supported. To express condolences, please sign our online guest book at www.flaniganfuneralhome.com. Arrangements By: Junior E. Flanigan of Flanigan Funeral Home and Crematory, Buford, GA (770) 932-1133.

The family of James Robert McKinnon created this Life Tributes page to make it easy to share your memories.