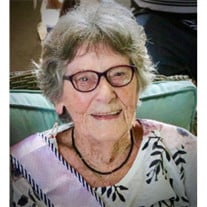 Janice Stetson Banwell, Sugar Hill, Georgia passed away on Thursday January 17, 2019 at home with family. She was born to Frank and Grace (Leathe) Stetson on August 12, 1918 in Melrose MA. She was raised in Arlington, MA, graduating from Arlington High School in 1936. Janice was an active member of her church choir, many theatre groups and political campaigns including that of Senator Henry Cabot Lodge. A progressive woman for her time, she started driving at 17 and bought her first car in 1939, soon after driving her mother and sister Rosamond to Miami Beach for a month long vacation. Upon returning she married Ray Banwell and lived in Boston and Woburn until Ray joined the Army. She worked at Forts Devens and Knox during the war. A lifelong secretary, publisher, and administrator, she moved to Central Florida in 1970, retiring from the Seminole Co. School System in 1980, later working part time as a Realtor and secretary of the First Congregational Church of Orange City, FL. She moved to Sugar Hill in January, 2014 to be with family. Janice was an active and lively person, enjoying all types of travel, possessing a keen wit and vocal opinions, an artist who prided herself in having a sharp mind and good memory, her favorite games being Bridge and Scrabble. She looked forward to and enjoyed celebrating her 100th Birthday Party this past August with family and friends, and continued celebrating right up to her passing. She was preceded in death by her husband of 61 years, Ray Banwell Sr. Mrs. Banwell is survived by her children Ray Banwell, Jr of Sugar Hill, GA, Ellen Danai, Raleigh, NC, Anne DePinto-Inklebarger and husband Jerry Inklebarger, Longwood, FL; grandchildren Aaron DePinto, Ashley Walter, Jamie Danai, and Amy Turner; great grandchildren James DePinto, Anthony DePinto, Preston Walter, Grant Walter, Kaylee Danai, Juliet Danai, Emma Turner, and Caroline Turner. A Memorial Worship Service will be held in her honor Saturday, January 26, 11 AM at Buford First United Methodist Church, 285 E. Main St. NE, Buford GA, 30518. Memorial contributions are suggested for American Cancer Society, cancer.org: World Wildlife Fund, WWF.org: or your local SPCA. Mrs. Banwell also supported the Mouth and Foot Painting Artists (Not a charity) mfpausa.com.

Janice Stetson Banwell, Sugar Hill, Georgia passed away on Thursday January 17, 2019 at home with family. She was born to Frank and Grace (Leathe) Stetson on August 12, 1918 in Melrose MA. She was raised in Arlington, MA, graduating from Arlington... View Obituary & Service Information

The family of Janice Banwell created this Life Tributes page to make it easy to share your memories.