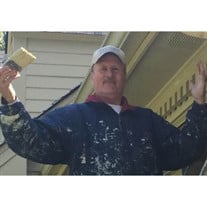 Jay August Nuedling, age 63, of Buford, GA passed away peacefully at his home on April 12, 2018. He was born on July 31, 1954, in Port Washington, WI, the son of August Frederick "Dutch" and Irene Nuedling. He is survived by his siblings, Jean (Ken Klopp), Kim (Pat Tilka), and Richard (Maria Nuedling). He graduated from Port Washington High School and attended University of Wisconsin White Water on a cross-country running scholarship. There he majored in hospitality management. He went on to follow in his father's footsteps as a painter with his business partner and buddy, Dan VanNus. He and his wife, Maria, wed in 1979 and were married for 38 years. He is survived by Maria as well as their two children, Sean August (Mckenzie) and Erin (Michael) Huegerich. Jay was blessed with, and thoroughly enjoyed, his 6 grandchildren: Knox (5); Wake August (4); Mila (4); Pike (4); James (1); and Emmi Jaye (1). Some call him Jay, some "Jay Bird", some "Jay Jay", some may even call him "Smelt"..... but if you met him even once you would call him a friend. The term "he'd do anything for anybody" gets thrown around a lot but this phrase truly embodies Jay's character. A relentlessly hard worker, wise spirit, and life of the party.... Jay certainly left his mark on those who had the pleasure of knowing him. We all looked up to him and we are honored to be in the wake of his legacy. He loved the Packers, running, tennis, cards, "Yahtzee Baby!"... and will shamelessly take anybody's money in poker. To say he will be missed is an understatement. To say he was loved can only be understood by knowing the unconditional love he gave. "...And the greatest of these is love" 1 Corinthians 13:13 Friends and family are welcome to come for visitation at Flanigan Funeral Home on Saturday, April 14th 2018 from 11 am-1 pm.

Jay August Nuedling, age 63, of Buford, GA passed away peacefully at his home on April 12, 2018. He was born on July 31, 1954, in Port Washington, WI, the son of August Frederick "Dutch" and Irene Nuedling. He is survived by his siblings, Jean... View Obituary & Service Information

The family of Jay Nuedling created this Life Tributes page to make it easy to share your memories.